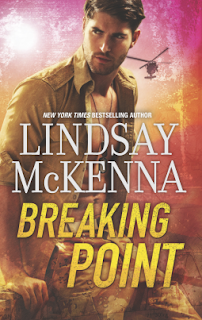 
In the line of fire…

The Alpha Platoon. A unit of Navy SEALs stationed in the unforgiving dryness of Afghanistan…who just learned that their newest team member is a woman. But Bay Thorn has a spine of steel—and the chops to prove it. Without a team to back her up, however, she's dead in the water. And her only ally is Gabe Griffin, a lone SEAL who is lethal, dangerous and unbearably attractive….

Between the open hostility from her team and the harsh Al Qaeda territory, Gabe is a lifeline for Bay. But mutual respect quickly grows into mutual attraction. And with each day and every assignment, the longing only deepens.

They mustn't speak of it. Mustn't act on it. Because in this line of work, falling in love can get you killed
Series: Hqn

Breaking Point seems like it has it all. Interesting characters, drama, romance. action, honor and heartbreaking situations.
It is non stopping action, drama I did not want to put the book down till I had finished.

The setting is in Afghan. Bay Thorn has been assigned atop secret mission. She is joining a Navy Seal team as a medic. Bay cares about people. She is brave, talented, smart. She speaks their language, and on top of it she is a sharp shooter.

Gabe Griffin is set to teach her the Navy Seals training that she will need on missions with his team.

Their are Seals who do not welcome Bay into their group. They do not think a woman can belong to their group and keep up that she will costs lives. Hammer is the biggest person outspoken against her. On first day Hammer and Bay get into a sniper rifle competition. She borrows Gabe's rifle. She has never used the military sharpshooter rifle. Bay did tell them she shot long distances to get meet for her family.

Bay proved that she could shoot and belong to their group.

The book got a little about how tough war is on everybody. How little the people of Afghan have compared to what we take for granted here in the states.(I personally live below the poor line in our country. Compared to them I am so rich. With warm house, groceries & clothes a plenty. Hey my outhouse is nailed shut.)

It also makes me want to sent a package of cookies to someone who does not receive any from home. Thank you for keeping our Country safe and trying to make a better world.

There is no boring parts to this story. I cared about Bay and was heart broken with her when some of her patients don't make it.

I like reading Lindsay McKenna's novels. They entertain, educate and leave us thankful for what we have.