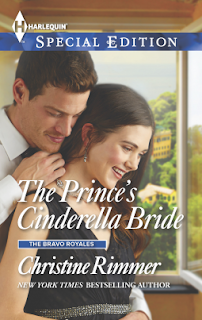 
From Texas nanny …to palace princess!

It should never have happened —the night of forbidden magic that turned Lani Vasquez and Prince Maximilian Bravo-Calabretti into lovers. After all, Lani knew all too well that an affair between a lowly nanny and the heir to the throne could only end in heartbreak— her own. Which was why she had to end it before she lost her herself completely…

His New Year's Eve with Lani had rocked Max's world —and now the Texas beauty wanted to be just friends? The single father had sworn he'd never marry again, but Lani had charmed his children and awakened his guarded heart. Will the prince catch his Cinderella before the clock strikes midnight?

My Review: The Prince's Cinderella Bride by Christine Rimmer

I wanted a little more to the story. Maybe if I had read the other books in the series I would like it more. There were a lot of love scenes that I skipped over.

I liked the characters. I could see why Lani was scared to have a love affair with a Prince. She was good with the different children. She had made some wrong choices when she was younger and was afraid of making them again.

Lani was a nanny for her best friend Sydney and her husband Prince Rule. At night she was writing books of historical romance and using the royal library. She has spent a lot of time with Prince Maximilian in the library. He has written books too.

Prince Maximilian Bravo-Calabretti is heir to the throne. He is a widower with two children. He does not plan on ever getting married again. He has been attracted to Lani from the first. He has worked slowly to gain her trust. After they slept together one night Lani has been avoiding him. I have mixed thoughts about the Prince. He is devious in planning to get Lani where he wants her.

Max has a girl named Connie who is six and Nick is eight. He is a good father to his kids.

The setting for this series is Montedoro is by France. The ruler is Prince Maximilian's mother. Who has nine children. Max is the oldest.

I was given this ebook to read and in return agreed to give honest review of it by Netgalley and Harlequin.