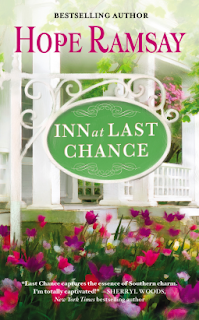 Jenny Carpenter is the unrivaled pie-baking champion of Last Chance, South Carolina's annual Watermelon Festival and the town's unofficial spinster. With her dream of marriage and children on hold, she focuses on another dream, turning the local haunted house into a charming bed-and-breakfast. But her plans go off course when the home's former owner shows up on her doorstep on a dark and stormy night . . .

Mega-bestselling horror writer Gabriel Raintree is as mysterious and tortured as his heroes. His family's long-deserted mansion is just the inspiration he needs to finish his latest twisted tale, or so he thinks until he learns it's been sold. The new innkeeper proves to be as determined as she is kind, and soon Gabriel finds himself a paying guest in his own home. As Jenny and Gabe bring new passion to the old house, can she convince him to leave the ghosts of his past behind-and make Last Chance their first choice for a future together?
Series: Last Chance
Mass Market Paperback: 368 pages
Publisher: Forever (April 29, 2014)
Language: English
ISBN-10: 1455522317
ISBN-13: 978-1455522316

My Review: Inn at Last Chance by Hope Ramsay

This had some twists that blindsided me. Lots of drama, action, book reviews and saving libraries, secrets and ghosts.
I like the reading guide questions. Sometimes I would like to read them first and if I had it would have ruined some of the twists for me.

I like Jenny. She is going for her dream. When she is offered a lot of money to sale her dream she says no. She is willing to fight for her dreams. Also willing to do a lot to help make her town better.

Gabriel Raintree has writer's block. He wants to come back to Last Chance and live in his family's Jonquil house that he just sold.
He is brooding, stubborn and has secrets. He believes everyone has a price. He is a famous writer and his books have been made into movies.

Zeph is always quiet and seems to walk around with a gun in the woods. He warns Jenny and Gabriel to leave Jonquil alone. He does woodworking. He used to work for Gabriel's family. His grandfather blames Zeph for the death of Luke years ago.

Luke died as a teenager. Gabriel was 10 years old but does not remember the accident. Zeph was the only adult their with the three boys. Simon was their too. Luke has definite ideas about what he likes and dislikes. Luke loves animals.

Jenny has given up on finding a husband. She is starting her own business. She bought the old Jonquil house and is fixing it up to be a bed & breakfast. She loves to cook. She belongs to the local book club. She always read the chosen book till the end even if she does not like it.

The book club and saving the library are big components to the story. I admit to not having read most of the books they have discussed. Tempted to read some of their selections though like Little Women.

The setting for the story is outside of Last Chance a small southern town.

Jenny so far has no furniture in the bed and breakfast except an old iron bed that she has cleaned up and new mattress on it. When Gabriel wants into stay before its open Jenny says no. So Gabriel offers to buy it back. He wants to stay for three months so he can write his next book.

When Nita comes up with ideas to save the library it involves getting Gabriel involved with it. Get lots of folks interested and convince the county to keep its library.

This book is a good mix of a ghost story, romance and mystery all in one. Part of the violence is the ghost but someone else is trying to ruin Jenny. Lots of strong opinions come out that are causing fights around Last Chance.

I was given this ebook to read and asked in return to give honest review of it by Netgalley.
Posted by rhonda1111 at 11:18 AM