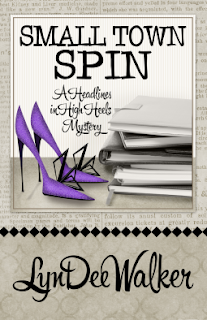 When a superstar athlete’s son turns up dead in a tiny town on the Virginia coast, crime reporter Nichelle Clarke gets the inside scoop. But she quickly spies a gaping hole her inner Lois Lane cannot ignore.

Determined to unravel the mystery, Nichelle fights off paparazzi cameras and an unexpected rival. She uncovers an illegal moonshine operation, a string of copycat suicides, and a slew of closets stacked with more skeletons than slingbacks. Chasing a killer who’s a breath from getting away with murder, Nichelle realizes too late the culprit has her number—and it might be up. 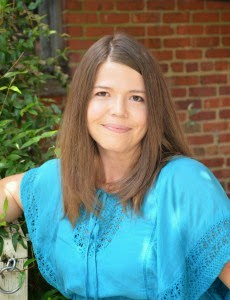 LynDee Walker’s award-winning journalistic work has appeared in newspapers and magazines across the nation. After nearly a decade covering crime, courts, and local politics, she left full-time reporting for motherhood with a side of freelancing and fiction writing. Small Town Spin is the third in her bestselling Headlines in High Heels Mystery series. The fourth arrives January 2015.

LynDee adores her family, her readers, and enchiladas. She often works out tricky plot points while walking off the enchiladas. She lives in Richmond, Virginia, where she is either playing with her children or working on her next novel (but probably not cleaning her house).
Author Links

I have enjoyed reading A Headlines in High Heels Mystery. Nichelle really knows how to use her heels. I was totally lost about who was guilty and what was really going on. Lots of drama and crime stories, some romance. I really like the rescue scene.

Nichelle Clark is a crime reporter for Richmond VA paper. She has someone gunning for her job. She is always trying to scope a TV reporter Charlie. Nichelle likes two different guys, that are opposites when it comes to the law.

She has taken the day off because she does not feel well when she gets called to work a teen suicide of a famous football player. Nichelle will be the only reporter the family will talk too. After talking to parents, Sheriff Nichelle does not want to write it off as a suicide right away.

There were a couple of stories I keep thinking and rethinking about. One a girls dancing bar. Church ladies are out in parking lot taking pictures of cars and men and sending to the wives. Nichelle goes in to here their story. She tries to cover both opinions.
I finally decided I would be upset if I found out that my husband was at the bar. That would be any bar. No matter what the girls were wearing or not wearing.

Nichelle sure writes a lot of stories in a day. I thought that was interesting.

Lately I seem to read a lot of stories with women not knowing which guy to choose. One of them is some type of cop and the other guy is on the other side of law or sitting on the fence. The dangerous guy sounds more interesting in the books. In this case I do like what I know about Joey. In real life no way.

I will keep reading this series by LynDee Walker.

I was given this ebook to read for purpose of giving an honest review by Netgalley and Henery Press.