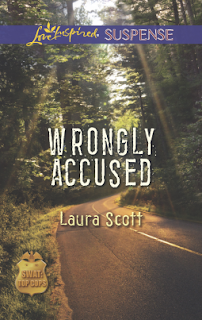 Only one thing matters to Caleb O'Malley: his daughter. Framed for his wife's murder, Caleb's only wish is to see his little girl. But Noelle Whitman, his daughter's foster mother, isn't buying his plea of innocence until bullets start flying and they're running for their lives. Staying one step ahead of the real killer proves nearly impossible, but former SWAT cop Caleb will risk everything to keep them safe. Because now there is nothing more important than Noelle and his daughter—not his freedom, not even his life.

SWAT: Top Cops—Love in the line of duty

My Review:Wrongly Accused by Laura Scott

I like the characters Caleb, Noelle and Kaitlin. Lots of action, drama, prayer and fast paced.
Parts I did not like was a few chapters close to the ending. I felt they were rushed and really left part of the story out. Like it was cut out or something. I needed to know more about the first murder and the revenge. I don't really want to say more in detail because I would be giving too much of the story away.

The plot was Caleb O'Malley was framed for his wife's murder. He got out of jail because the witness disappeared. When Caleb is going to pick his daughter up from her foster mother Noelle someone tried to kill him. He made Noelle, leave with him and his daughter and they took her car.

Who is trying to kill Caleb and why now? Who really killed his wife? Noelle does not trust Caleb but she loves Kaitlin. Kaitlin is scared of her father she has not seen for over a year.

Noelle was Kaitlin's preschool teacher and applied to get her as her foster daughter. She has taught her how to pray and taken her to church.

Caleb was a member of a SWAT team. He can not believe he was framed. He feels it must be a member of his team that framed him for his wife's murder. He goes on the run instead of calling the police to protect them. No one believed him even his best friend and fellow S.W.A.T. members.

I like how Caleb was so tender and loving with his daughter. He realized he had made mistakes with his marriage. How even though he never went to church he is grateful that Noelle took his daughter and taught her about faith.

This is a clean read. Talks about prayer and is not afraid to mention it more than once in the story.
I want to read the rest of the series and see how the different members of the S.W.A.T. team cope with the changes.

I was given this ebook to read and in exchange asked to give honest review by Netgalley and Harlequin.

Hi Rhonda! I just saw your comment on Cedar Fort's blog expressing your interest in participating in "Uncovering Cobbogoth's" May blog tour? I am so sorry about the mix up. But if you're still interested, I can put you down for the 16th. Will you e-mail me at uncoveringcobbogothinfo@gmail.com to let me know if you're still interested. Then I can get the ball rolling for you. Thanks!