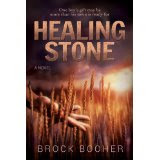 Abandoned in a graveyard and a mother who was never found—that’s all Stone Molony knows about his birth. But now he needs to know more. A tragic accident has awakened a powerful gift inside him that changes everything. As the town stirs up around him, Stone journeys through corruption, racism, and violence to uncover the truth about his past.
Paperback: 336 pages
Publisher: Cedar Fort, Inc. (April 8, 2014)
Language: English
ISBN-10: 146211394X
ISBN-13: 978-1462113941

Brock Booher grew up on a farm in rural Kentucky, the fourth of ten children, where he learned to work hard, use his imagination, and believe in himself. He left the farm to pursue the friendly skies as a pilot, and currently flies for a major US carrier. A dedicated husband and father of six children, he began writing out of sheer arrogance, but the writing craft quickly humbled him. During that process, he discovered that he enjoyed writing because it is an endeavor that can never quite be mastered. He still gladly struggles everyday to improve his writing and storytelling skills.

Healing Stone does not feel like a debut book. I like the characters, they were a good mix. They had good and bad sides. Dealt with real issues that were part of history. It engaged my emotions, yes I cried in a few places. It had me rooting for some of the characters to be healed. Some decisions made me think what would I do? I did figure out early who the character that was doing the bad stuff was.

The setting was small town Kentucky. Where Stone Molony was raised on a farm. Close by was also the smaller poorer place where the blacks lived.

Stone Molony was abandoned in a graveyard and a note said give him to this farmer & his wife, Billy and Ada Molony. Stone worked hard on the farm, fished, was a regular teenager till one day he ran over his dog with the tractor. He found he had a gift of healing he did not know why or how it worked.

Ida and Billy Molony had one son and wanted more, but could not. They took stone in and treated him like his older brother Leck.
They were farmers.

Leck went to Korea and came home with metal still in him and on crutches. He was changed by war.

Billy wanted to keep it a secret that Stone could heal anyone. Ida wanted Leck healed. Stone did not know why he could heal some and not others.

This was a time when blacks could not drink out of same water fountains as the whites. Had to ride in the back of buses. Treated so poorly. Most did not have any education because they could not go to same school as whites.

Wonnie's family business was making moonshine. She just came home from living in the city so she could get some education. She wanted to change things. She wanted to sit down by Stone at the theater not up in black only seats.

Wonnie opened Stone eyes and mind to ask why should she have too. Also opened my eyes too how bad and different things were.

Stone had to find his courage, figure out who to heal and how too. He was asking some hard questions about the people around him, his past and choices he had to make.

This is a clean read, does deal with some real bad conditions and evil people, and history coming alive for me.

I was given this ebook to read and asked to give honest review of it.