Defending the Eyewitness by Rachel Lee 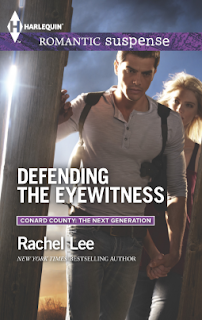 The note wasn't a threat, exactly. But for Corey Donahue, who'd witnessed her mother's murder as a child, it felt very menacing. Surprisingly, the one person she trusted to show the note to was a man merely renting a room from her—Austin Mendez. Traumatized since childhood, Corey had never trusted men…until Austin moved in.

Six years undercover had caused Austin to shut everyone out…until Corey. The vulnerability she hid from others made him yearn to break down the walls she'd erected around her heart. And with a killer closing in, two lost souls were discovering the trust they'd lost—and much more—in each other's arms

My Review: Defending the Eyewitness

I liked parts of the story but never got lost in it. The relationship felt rushed to me and went straight to physical when Corey spent all of her life avoiding men. She had reasons for her fears. She saw her mom murdered right in front of her. Then she lost her memories at 7.

Corey rents the upstairs of her house to usually to college students. Now the Sheriff brings over a man and asks her to rent it to him that he is the friend of a friend. Corey agrees to rent the upstairs to Austin and he gets kitchen uses.

To me Corey is afraid to leave her town, really only deals with women in her business. She does not seem real to me. If she is that scared then why agree to let him into her house just because the Sheriff asks. Then after a few dinners and a fight she asks him to make love with her.

Austin character seems real. He has been undercover for six years and needs to have a change to figure out what to do next. He shows how hard to join again. Also he figures like a cop that there is something wrong with the notes Corey is getting.

The Killer does not make sense but then killers don't to me. I wanted to know more about him and his motive.

There was a lot of sex scenes that I skipped over. The threat of danger was real, a little action.
I really enjoyed the dinners that Austin and Corey made. How Corey was trying to be around Austin in the kitchen. Those scenes really worked for me. I wish there were more of them.

There have been so many stories by Rachel in Conrad County but this story really only 5 different characters really only three. I would have liked more.

I was given this ebook to read and asked in exchange to give honest review by Netgalley and Harlequin.