The Sage After Rain A love story by Jaclyn Hawkes 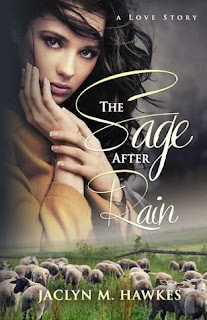 High Society or High Desert?
A Washington D.C. socialite would never walk away from the power and prestige of marrying a sitting U.S. Congressman—especially not to live in the high desert out west, would she?
At least that’s what Taya Kaye hopes the corrupt elected officials from inside the Washington beltway assume. Faced with the choice of disappearing into the witness protection program, or into the high desert, Taya opts for Colorado color country and a world far removed from the glamour and hype of high society.
It’s not so secret as secluded, and surprisingly, after what she’s been through at the hands of those in power, Taya is just fine with that. It’s peaceful and simple. Unpretentious. Safe.
After all, what could possibly happen to her in the desert, where the smell of the sagebrush after the desert rain is like a drug? And who knew she’d discover the most masculine and intriguing man she’d ever met out in the middle of nowhere?
Sometimes power has more to do with strength, than with politics.
Kindle Edition, 270 pages

My Review:The Sage After Rain A love story by Jaclyn Hawkes

LDS Romance story. I liked it. Others might find a lot of religion talk in it. It is a clean romance with some danger on the side.

I like Taya. She is smart, beautiful, believes in helping others, of doing what is right. Taya starts out getting ready to go to a fundraiser with her parents and fiancé a U.S Congressman. Her mom wants her to take off her jacket and show her arms. Taya refuses because it would not be modest. Soon everyone is trying to pressure her into it. Taya stays strong. but her fiancé gets mad and hits her and knock her into the wall. While she is hurt bleeding everyone including her parents leave her hurting on the floor.

Taya presses charges and because the police taking evidence more misdeeds come to light. They want her to go into witness protection. Instead she goes out west to college friend and gets hired to watch sheep all by herself.

Matt Maylon life is a mess. He somehow ended up living with a girl named Stacy who drinks a lot. He is supposed to be working in an office, but his coworkers instead of working are just staying at motel, partying and doing drugs. So Matt trying to save his job does their work and his.

Matt is a nice guy and hard worker. When he runs across Taya tending sheep. They slowly become friends and help each other when things get dangerous. Taya also helps Matt to save his job.

They both feel they can trust each other and Matt ends up camping by her sheep trailer using her electricity and shower. He helps her to stay safe. Her knowledge and use of rifle saves him. They for the most part at first just end up leaving things for each other like dinner or breakfast.

Taya is in hiding but she asks Matt to go with her to church. They go to different towns and always goes in late so no one will ask their names.

When two strangers come to sheep camp Matt pretends that the sheep camp is his. He has not seen anyone like a women sheepherder.

I like Jaclyn Hawkes books. I bought this on amazon.
Posted by rhonda1111 at 3:08 PM