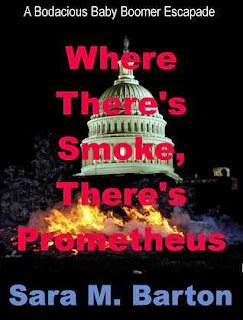 In 1978, Maddy Walker can't understand why a group of psychics from the Inner Sanctum of Atlantis insist she has mystical powers. Introduced by the strange Dr. Ben Pynchon, alternative psychology professor best known for promoting UFOs, Maddy is spooked by the New Age mystics. What are they really after when they try to recruit the young psychology student and several other young women? Is it a genuine effort to create world peace or is this part of a fifty-year Soviet plot to penetrate the U.S. government? Tossed into Prometheus's fire, Maddy must fight to survive the classified psychic research programs for the Defense Intelligence Agency. Was Navy vet Tom murdered because he knew too much about what was being done to his fellow vets by the psychics? Were her friends Pansy and Amy attacked to force her to join the dark side? Pursued by a string of fabricated catastrophes and disasters, Maddy must rely on her wits and psychology background to survive. Betrayal, deceit, and despair turn her world upside down as the protectors of the Inner Sanctum of Atlantis reach out to manipulate the Pentagon. Protected by a powerful senator, the psychics gain ground in Congress with their phony telepathy experiments and dirty tricks. There's no turning back once Maddy realizes Senator Harmon Wilson's aide, Bradley Bartlett has set up the murder of the Assistant Secretary of the Navy. From Capitol Hill to the coast of Maine, Maddy must outwit her captors long enough to expose their evil game over the next three decades.
File Size: 493 KB
Print Length: 279 pages
Simultaneous Device Usage: Unlimited
Publisher: Sara M. Barton (May 12, 2012)

This has a complex plot that in many ways went over my head. I was trying to follow all the twists and turns I never really connected to the characters. I was surprised many times at where the plot was taken too. It has spies, violence and action. You never are sure who to trust.
I would not like to live that way.

Maddy Walker is a college student. One of her professors really works to draw her into his beliefs. Their is a lot of peace not war, anti government, psychics. Maddy wants to work with dying patients. If you did not agree with the professor you were kicked out of his class.

The setting for the most part was after Vietnam college campus during the cold war with USSR. With sleeper cells with a 50 year plan.

I can see how a lot of the issues of the 60's are still around with different agendas. anti-war at colleges, drug scenes, brain washing, sleeper cells, You can see history repeating itself in so many ways.

I liked Maddy but the other characters where all hiding agendas. Never really connected and cared for the others characters. Some of the characters that I did not like seemed to succeed in life.

I like Sara's mysteries and will continue to read her stories. If you like deep complex stories try this book.

There is a lot of violence but she rates her books PG. I agree it is not graphic in details of violence.
Posted by rhonda1111 at 7:32 PM