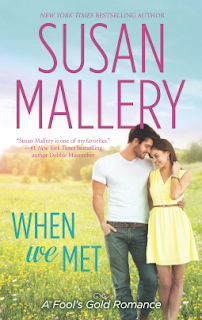 
New York Times bestselling author Susan Mallery invites you back to Fool's Gold, where a newcomer to town might finally meet the man she never knew she needed…

Angel Whittaker earned his scars the hard way, but the scars that can't be seen are the ones that haunt him the most. Since he moved to Fool's Gold, California, he's cobbled together a life for himself as a bodyguard trainer. If he's not exactly happy, at least his heart is safe.

Working with pro-football superstars taught tough-talking PR woman Taryn Crawford one thing—she can go toe-to-toe with any man. But then dark, dangerous former Special Ops Angel targets her for seduction…and challenges her to resist his tempting kisses.

Even in four-inch heels, Taryn never backs down. Unless, somehow, Angel can convince her that surrender might feel even better than victory.

My Review: When We Met by Susan Mallery (Fool's Gold #13)

I love the Fool's Gold series of books. The characters are interesting and so different. There is such a community with old familiar characters. There were a variety of new characters that still your heart. It is full of relationships with the characters. I did not put the book down till I had finished reading it.

There are a few love scenes that I skipped over. Another part of the book is the break up and party after. This time their is a different party twist on it.

We learn a lot about Scores in this book. Taryn is partners with three ex football players. She is the creative force of the team. They are moved into town now. Jack, Sam and Kenny are rich former pro-football players. The four of them are like family.

Angel is the last unattached member of the bodyguard school. He is a widower. Has no plans to get married again. He is really attracted to Taryn and lets her know up front.

The Acorns are loveable and scare Angel when he finds out what they really are. Taryn strikes a deal she will help him if he will help her to get ready for a client she has.

I like how Angel wants to do service and give back to the town. He is a good roll model.
I also like how Taryn sees a need and tries to help with friends she comes up with a good idea that helps the person she was targeting but also helped a lot of others in the process.

This book has a lot of charm, humor and is very entertaining. There is drama and action with romance on top of it.
I will keep reading Fool' Gold books in the future.

I was given this ebook to read for purpose of giving a honest review of it by Netgalley and Harlequin.
Posted by rhonda1111 at 11:34 AM