A Family for the Bull Rider by Tina Leonard

**Harlequin, one of the world's leading publishers of books for women, and the Professional Bull Riders (PBR), the world's premier bull riding organization, are happy to share a book publishing partnership that debuts in May 2015. These four re-issued, re-titled novels containing distinctive PBR content will be published under the new Harlequin Pro Bull Riders imprint, and feature actual PBR bull riders on the covers. Harlequin Pro Bull Riders novels will be available exclusively at Wal-Mart stores in the United States.** 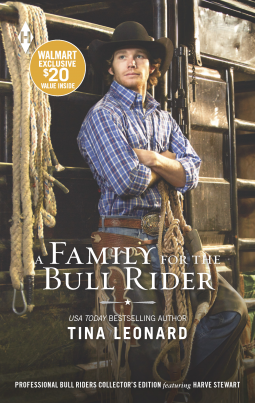 Jack Morgan came home to the Morgans’ Texas ranch on urgent family business—not to get roped into marriage. But he’s finding it impossible to steer clear of his attraction to angelic Cricket Jasper. Now the virtuous deacon is pregnant…with triplets!
The sexy rodeo rider has always been in Cricket’s secret prayers. But she never dreamed she’d be having Jack’s babies! She knows the firstborn Morgan son came home to make things right with his estranged father. Now he’s about to become a father.
What will it take to make a family man out of this wandering rover? Because if three babies and the love of a good woman aren’t enough to settle down this lonesome cowboy, nothing will be!

My review: A Family for the Bull Rider by Tina Leonard

This is for a brand new line PBR that will be sold just at Walmart.  It is a reissue,  With a real rodeo cowboy on the cover.

While this book does stand okay on it's own it makes me want to read the four stories before it about the Morgan sons. Especially was confusing was the three ghosts.

Plenty of family drama, some romance, some rodeo and lots of babies.  It is a clean read, love scenes behind doors.

Jack Morgan is a bull rider who has been away from his home for years after a fight with his father about his rodeo riding.  Now Jack has come back because his father needs a kidney and he is a match.
He is willing to give his kidney to his father but still plans to ride bulls.

Cricket Jasper is a deacon in her church.  She has a crush on Jack.  She has only met him a time or two.  She is friends with three of his sister-in-laws.  She goes to visit his father in the hospital and has been asked to get drapes for the ranch house done. Now she is pregnant with triplets after a one night stand.
Josiah Morgan needs a new kidney.  He is afraid if he accepts Jack's kidney than what happens if he gets injured riding a bull.  He has offered each of his sons a million dollars if they move back to the ranch for a year. He has also been matchmaking for them all with a wife who had kids. Now he has more strings for Jack.
I wish this was a longer book, had more about the rodeo in it. More about Cricket's pregnancy.  I liked how Jack was willing to jump in and be a father. I really liked how the love making was behind doors.
I was given this ebook to read by Net Galley and Harlequin and in return I agreed to give honest review of A Family for the Bull Rider.