The Dead Play On by Heather Graham (Cafferty and Quinn #3) 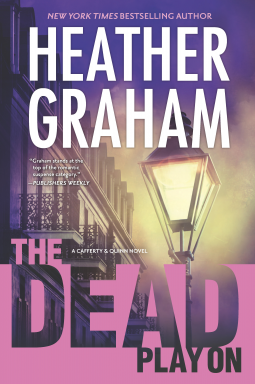 Play a song for me…

Musicians are being murdered in New Orleans. But Arnie Watson apparently died by his own hand. When Tyler Anderson plays the saxophone he inherited from Arnie, a soldier and musician who died soon after his return, he believes he sees visions of his friend's life—and death. He becomes convinced Arnie was murdered and that the instrument had something to do with whatever happened, and with whatever's happening all over the city…

Tyler knows his theory sounds crazy to the police, so he approaches Danni Cafferty, hoping she and Michael Quinn will find out what the cops couldn't. Or wouldn't. After all, Cafferty and Quinn have become famous for solving unusual crimes.

They're partners in their personal lives, too. Quinn's a private investigator and Danni works with him. When they look into the case, they discover a secret lover of Arnie's and a history of jealousies and old hatreds that leads them back to the band Arnie once played with—and Tyler plays with now.

They discover that sometimes, for some people, the line between passion and obsession is hard to draw. Only in uncovering the truth can they hope to save others—and themselves—from the deadly hands of a killer

My review: The Dead Play On by Heather Graham (Cafferty and Quinn #3)
4 stars
This is the third Cafferty and Quinn book.  It is good suspense book.  I was not sure of who the killer was until the reveal.  Someone is killing musicians in New Orleans. This has a lot of the same characters plus a whole bunch of new ones.
Danni Cafferty is a artist and owns a antique store. Her boyfriend is Quinn.  They work with weird cases that might have evil or power items.  She sleep paints clues in the middle of the night.
Michael Quinn is a P.I.  He has a lot of history. He was a athlete who caught up in drugs and died and they saved him he changed his life.  He became a cop.  His girl friend is Danni.  He worked first with Danni's father.  Taking  care of weird mystical items.
Tyler is in a band.  He is playing a saxophone that his deceased friend owned.  While he is playing his best he sees his friend's last few moments and realizes he was murdered.  He goes to Danni to tell his story.
Danni and Quinn become part of the music scene to figure out who and why someone is killing musicians.
There was a few love scenes in the book. Lots of murders.  I do like reading about Danni & Quinn and their friends.
I was given this ebook to read by Net Galley and Harlequin.  In return I agreed to give a honest review of The Dead Play On.
Posted by rhonda1111 at 10:10 PM