The Rancher Takes a Bride by Brenda Minton (Martin's Crossing #2) 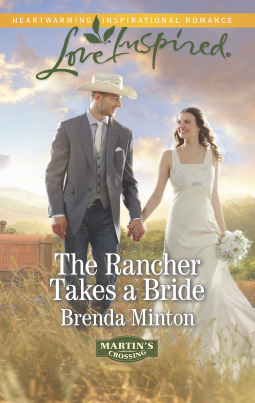 Martin's Crossing: In this small Texas town, every heart finds a home

Duke Martin is a father! The former army medic is stunned when old love Oregon Jeffries tells him the news. Given his troubled past, the hardworking rancher and diner owner understands why Oregon kept his daughter a secret for twelve years. But now Duke desperately wants to make up for lost time. As he sets out to be a true father to Lilly, he soon realizes his feelings for Oregon are growing stronger. When Oregon's health falters, he's ready to care for her and prove that he's worthy of her love. Could this be Duke's second chance with the woman he never should have let get away?

My review:  The Rancher Takes a Bride by Brenda Minton

This is the second Martin's Crossing book.  I would like to live there.  This has lots of drama, especially dealing with parents, romance and a clean read.
Oregon Jeffries has come to Martin's Crossing a year ago with her daughter Lily.  She is a single mother with her own business.

Lily was hit by a car crossing the street between her mother's store and Duke's restraint.  Lily was going to sweep up for Duke's to earn money for her horse.

Oregon knows she can not keep the secret anymore that Duke Martin is Lily's father.

Duke used to drink a lot and has lots of black outs. He does not remember Oregon from years ago.  He does not doubt that he is Lily's father.  He wants to be part of her life.  He moves Oregon and Lily into the cottage on the ranch he was living in while he was fixed up the old house.

There are more secrets that come out in Martin's Crossing dealing with the homeless man Joe.

This is a nice fast read with characters that I like and would love to see more about.

I was given this ebook by Harlequin and Net Galley.  In return I agreed to give honest review of The Rancher Takes A Bride.
Posted by rhonda1111 at 2:34 PM