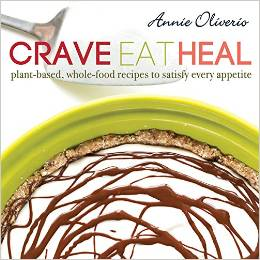 About the book:
After struggling for many years with a raging sweet tooth and emotionally-driven cravings, author Annie Oliverio began the journey back to a healthy, balanced palate. This is a cookbook focused on plant-based foods that protect, nourish, and heal – yet satisfy “cravings” that can easily trip one up when striving to eat healthier foods or when feeling lonely, stressed or in the need of comfort.

About the author, in her own words:

If there is an unnamed, undiagnosed condition where one suffers from planning, thinking about, and anticipating future breakfasts, lunches, and dinners while eating breakfast, lunch, or dinner, then I have it. And I don’t want to be cured. But I wouldn’t be opposed to having this ailment named after me.
I was fortunate to be raised in a home with two excellent cooks: my mom and dad. Mom covered the basics of breakfasts, lunches in brown paper bags, and a square meal at night. She also covered Thanksgiving and Easter dinners. Dad took over on Christmas Eve or whenever an ingredient—be it a stinky cheese or olives or eggplant or artichokes or polenta—caught his fancy. Sauce splatters and piles of pots and pans in the sink were guaranteed. Between mom and dad, my three siblings and I ate eclectically and well.
My own culinary journey got off to a rocky start when I began living on my own post-college. I went for convenience and speed (and sugary, fatty, salty) rather than quality. Slowly, however, I began buying more fresh and whole foods to make my own meals. At the same time, I was learning about what foods are best for our bodies. Long story short, my plodding and indirect journey led me to plant-based eating. I no longer rely on packaged, frozen, or prepared meals, and instead make everything we need right here in our own kitchen.
What about the non-food part of my life? Before escaping the mean city streets for the wild, windy plains of Oklahoma, I was an administrative assistant and office manager at a subscription fulfillment company in Boulder, at a think-tank in Santa Monica, at a university in Cambridge, MA, in the Green Zone in Baghdad, and at a non-profit in Washington, D.C.
I now spend a good deal of time walking the pastures trying to identify different types of grasses and insects, feeding hummingbirds, writing and reading, struggling to solve crossword puzzles (with a pen and a lot of Wite-Out), and blogging at An Unrefined Vegan and Virtual Vegan Potluck. I live in blissful satellite- and cable-free isolation with my husband, Kel, and our only son, Ike (part dachshund, part Labrador).

Crave eat Heal is a Vegan, no sugar, few oil cookbook.  Now I am not a vegan but I can use this cookbook to eat healthier. There are so many of the foods listed that I have never heard of and some I have never tried. But I am going to try.

Annie tells us in the front of the book why and how she became a Vegan.  What foods she eats if she needs certain vitamins or minerals.  That cravings our bodies are telling us what we need in our diets.

One thing she uses is Tofu.  She shows us how she cuts it up which way for the recipes.  She also loves her tofu press. I have never tried it but I am willing to now.

Annie has chapters based on what you are craving like sweets, sour, spicy even chocolate.  Recipes that will satisfy you but are healthy. I want to try the chocolate cake recipe.

The pictures in the book are good and I like that every item that was made was eaten after the picture was taken.

In the back of the book she tells what brands and where she buys certain things on the internet because she does not live close to health food stores.  I can really use those.

I know I am going to buy some foods that I have never tried lots of different beans, vegetables and spices and eat better.

I was given this ebook by Cedar Fort Publishers and in return I agreed to give honest review of Crave, Eat, Heal and be part of its blog tour.

Rhonda - thank you so much for your thoughtful and detailed review of my cookbook! I hope that you continue to use and enjoy it. Best, Annie