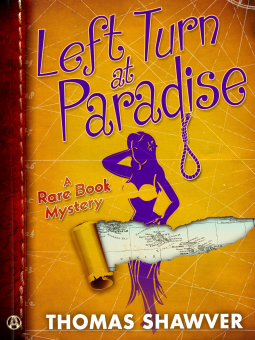 The author of The Dirty Book Murder returns to the surprisingly lethal world of rare books with a second enthralling novel featuring a most unlikely hero—antiquarian bookseller Michael Bevan.

Michael Bevan is barely scraping by with his used bookstore and rare book collection when he discovers a timeworn journal that may change everything. Dating back to 1768, the tattered diary appears to be a chronicle kept during the first of legendary seafarer Captain James Cook’s three epic voyages through the Pacific islands. If it’s as valuable as Mike thinks it is, its sale may just bring enough to keep his faltering used bookstore afloat for another year.

Then he meets a pair of London dealers with startling news: Adrian Hart and Penelope Wilkes claim to possess the journal of Cook’s second voyage. Is it possible a third diary exists? One which might detail Cook’s explosive final voyage—and his death at the hands of native Hawaiians? Together, all three would be the holy grail of Pacific exploration. But before Mike can act, the two journals are stolen.

Chasing them down will sweep Michael, Adrian, and Penelope across the globe—past a dead body or two—and into a very sinister slice of paradise. High in the Southern Alps of New Zealand, in a remote and secretive Maori compound, a secret rests in the hands in of a man daring enough to rewrite history . . . and desperate enough to kill.

My review: Left Turn at Paradise by Thomas Shawver ( A Rare Book Mystery#2)

I loved the settings. Makes me want to go to New Zealand The history of the Maori people. The background of Captain James Cook.  Of course love the world of books.

I like the suspense of the story.  Never sure who to trust. Lots of drama, action. I was surprised with all the different twists the story took.

The characters I just did not connect with any.  There were some minor ones that I liked .

Michael Bevan was a lawyer now he owns a bookstore.  He enjoys it more but always complains about the internet lowering the price of books.  He finds a journal that he had in his attic that is from a sailor who was with Captain Cook on his first voyage to explore.

He finds out is one of three journals of each of Captain Cooks trips.  He is offered a lot of money to sale it to the ones who owns the second journal or for the same price he can buy the second book. Both books get stolen and the journey to find them and the third begins.

Penelope Wilkes (Pillow)  is part owner of the Book and Bell out of England.  They own the second journal.  She is beautiful.  She has scars on one side of her face.  She has had a tough life.

Adrian Hart is the one who found the second journal in the Cotswolds. He owns half of the Book and Bell.  He is determined to get his journal back and find the third book.

All three end up going to New Zealand following the thief.

They have lots of surprises in store for them.  As they travel up some Mountains to get to the owner they believe has the journal.

I would read another book by Thomas Shawver in the future.

I was given this ebook to read by Net Galley and Random House Publishing Group - Alibi.  In return I agreed to give a honest review of Left Turn at Paradise.