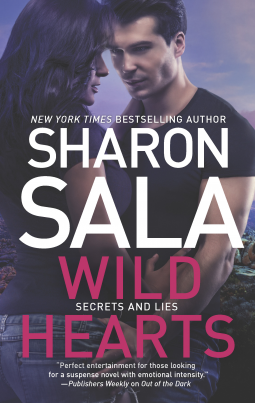 Past Sins Cast a Long Shadow

Dallas Phillips refuses to believe her father committed suicide, even though things were tough on his farm and he was deeply in debt. When she hears he'd told a neighbor about an upcoming windfall, she grows suspicious, and her suspicion only deepens when she realizes someone is lurking in the nearby mountains after dark.

For help, she turns to Trey Jakes, local police chief—and her former lover. As they begin to investigate, another mystery comes to light. Trey's mother is beginning to remember events from thirty years ago, something shadowy that happened in the mountains, and Dallas's father was there, too. Is what happened that night connected to his "suicide"? As they search for the truth, Trey and Dallas struggle to fight their attraction, but they may not be able to fend off another force—a killer who's more than willing to kill again to make sure old secrets stay buried.

This the first book of a trilogy. I want the next two books soon. Wild Hearts is full of suspense, drama, romance and mystery.  It is full of surprises.  I like Trey and the rest of the characters.
The ending chapters are really good. I wanted to cheer too.

One mystery happened in May 1980.  There is a car chase.  The car in front is running from something and the teenagers are drunk and scared. The ones that make it can't remember anything. Now one of them is starting to have nightmares.

Dallas Phillips left home after graduation.  She is a news reporter.  Her father has died so she is coming back home.  She does not believe her father killed himself.  She had loved Trey but he did not want to live in big city and she did not want to stay.

Trey Jakes is police chief.  He is still single.  He calls Dallas and gives her the bad news.  He still loves Dallas.  He is brave, honest and cares about the people around him.

Trey's mother Betsy finds Dick's body.  Both Betsy and Dick were in the car accident years ago.

Dallas is the central character of this story and I have to admire her.  She is willing to fight for her father both mentally and physically.

Some story lines continue into at least the next book.  So we don't know what characters are ones not to trust. I really want to know.

There are a few love scenes in the book. Easy to skip over if you want to.

I was  given this ebook from Net Galley and Harlequin.  In return I agreed to give honest review of Wild Hearts.