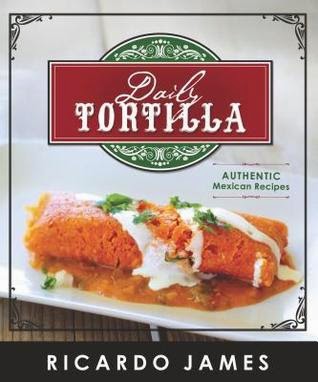 About the book:
Sopes, Tamales, Pozole, Huevos Rancheros, you’ve never had Mexican food like this! Daily Tortilla starts with the basics of tortillas, beans, rice, and salsas, and then builds to an incredibly delicious repertoire of dishes found in any family dining room in Mexico. Say “adios” to Americanized Mexican food this is authentic, south-of-the-border flavor at its finest!

About the author:
Ricardo M. James grew up in a rural town in Wyoming. He studied Spanish Pedagogy at Brigham Young University where he also taught Spanish and directed study abroad programs to Mexico. He currently owns a consulting firm that provides technology solutions to K-12 schools across the United States and South America. He lives in Springville, Utah with his wife and five kids. He blogs food goodness at RicardosRecipes.com.

I don't eat or cook Mexican food, some Mex-Tex food though. My girls would not eat any beans.
Now they do.  So I wanted some recipes.  These sound and look good.

I like how he explains what is Mexican food.  The ingredients they use. How they go to stores a lot and buy just the day or a few days worth of food.  They have tiny fridges and stores so they eat fresh foods.

He also explains that they use platforms in most of there cooking. Like tacos, tortillas and tamales.
These recipes have lots of peppers, beans, corn, rice, tomatoes.

I want to eat the desserts. They look and sound good.

This is a good cookbook to have if you want to start cooking Mexican foods.

I think it would make a great gift.

I was given this ebook to read by Cedar Fort Publishing.  In return I agreed to give a honest review and be part of its blog tour.