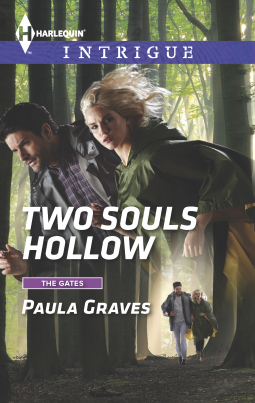 My review: Two Souls Hollow by Paula Graves (the Gates#6)

Good suspense action and romance. I have only read a few of the Gates series but have liked them and would love to go back and read the ones I have missed.  The mole is finally revealed.  It is also a clean read.

Anson Daughtry is off work because he is the only one left that could be the mole at the Gates.  Anson knows he is not the mole though so he is looking to see who else could have figured it out.

Ginny Coltrane works in pay role at the Gates.  She has got her brother drunk into the car at the bar he was at when 4 tough guys start surrounding her.  Anson decides to step in.  He gets beat up so she can get help.

The guys want Ginny's brother dead.  Ginny does not why.  Anson does not leave her to face things by herself.
Quinn trusts that Anson is not the mole but he is not sure. Quinn does help Ginny protect her brother.
It is a good read that I did not want to put down.
I would read more books by Paula Graves in the future based on reading this book.
I was given this ebook to read by Net Galley and Harlequin.  In return I agreed to give honest review of Two Souls Hollow.
Posted by rhonda1111 at 1:53 PM