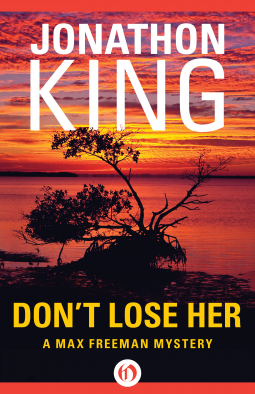 
Trawling the backstreets of Palm Beach County and waterways of the Everglades, this gritty thriller highlights the colorful beauty of Florida and it’s dark criminal underbelly.


In the middle of a day relaxing at the beach, Max receives a call from his old friend, whose eight-month pregnant wife has been kidnapped in broad daylight. While presiding over the hearing of a notorious drug lord, Diane is grabbed from the street and thrown into an unmarked van. Blindfolded and confused, Diane starts a friendship with her female captor, silently connecting over the dangerous situation they both share.


Freeman sets out to determine who took Diane, crossing paths with an array of standout characters along the way—to save her and her unborn child before it’s too late.

Jonathon King is the award-winning author of eight critically acclaimed thrillers set in Florida. His first novel, The Blue Edge of Midnight, won the 2002 Edgar Award. King was a police and court reporter for twenty-four years and has drawn from his experiences to inform his crime novels.
My review: Don't Lose Her by Jonathon King  (Max Freeman #7)
4 STARS
This is the 7th book in the Max Freeman series.  It is the first one that I  have read.  To me it stands alone okay.
The suspense is good.  I did not know what was the reason for the kidnapping or wither the judge would be rescued in time.
I liked Max and how he was willing to do what ever he needed to find his friend and rescue the judge.  Max Freeman is a PI Detective who works for Billie.
Diane is a federal judge hearing a case about a drug dealer who wants to be sent back to his country instead of being tried under the Rico law.  Diane is eight months pregnant. She is white with ties in Florida high society.
Billie is a lawyer and works out of his home.  He is a black lawyer with money and ties around the world. He has a stutter if he is facing anyone. He is smart.  He is honest but not afraid to break some laws to find some leads to his wife.
Diane is walking down the street going for lunch when a white van pulls up to her and pulls her into the van.  She has no idea who kidnapped her and why.  She has a bag over her head and no one talks to her.
Diane is smart and keeps trying to figure things out.  Too leave finger prints where she can. Tries to develop
a bond with her kidnapper.
The setting is Florida modern day.
I wanted more to the book.  Was not ready to put the book down.
I would read another book by Jonathon King in the future.
I was given this ebook from Net Galley and Open Road Integrated Media .  In return I agreed to give a honest review of Don't Lose Her.