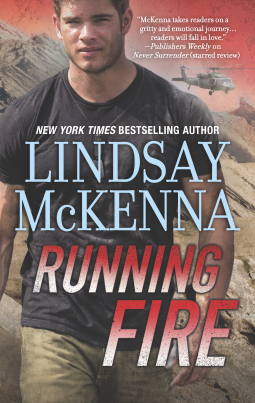 He was a haven in the midst of Hell…

Temporarily assigned to the Shadow Squadron in a troubled region of Afghanistan, Chief Warrant Officer and pilot Leah Mackenzie is no stranger to conflict—even if most of her physical and emotional scars are courtesy of her vicious ex. Still, she's got a bad feeling about picking up a team of stranded SEALs. A feeling that's all too justified once enemy fire hits their helicopter and all hell breaks loose…

SEAL Kell Ballard's goal was to get the injured pilot out of harm's way and find shelter deep in the labyrinth of caves. It's a place of dark intimacy, where Leah finds unexpected safety in a man's arms. Where prohibited attraction burns brightly. And where they'll hide until the time comes to face the enemy outside…and the enemy within their ranks.

Running fire is full of drama, romance, action, deals with abuse and deals with women in military.
Does have love scenes but not a major part of the story.  I admire the Navy Seal characters. Some of the Army ones not so much.

Chief Warrant Officer and pilot Leah Mackenzie has got a temporary assigned to the Shadow Squadron in Afghanistan.  She is the only woman pilot in the unit. Leah is a divorced.  It was not good marriage

Kell Ballard is a Navy Seal.  He is out in the Afghanistan borders in the caves in the mountain.  He is looking for a certain terrorist and getting information on terrorists. Kell is divorced too.

Leah is co-pilot in helicopter going in too pick up two soldiers.  When her helicopter is shot with a RPM.  She makes it out.

Kell sees the helicopter shot down.  He got the guys but too late.  Kell sees the pilot crawl out the helicopter and runs too him.  He is surprised when he picks the unconscious pilot over his shoulder and feels breasts.  He moves and hikes up to a cave where he can look at her.

I could not put the book down till I was finished reading it.  I liked the ending.

I enjoy reading books by Lindsay McKenna and will continue to read her books in the future.

I was given this ebook to read by Net Galley and Harlequin.  In return I agreed to give honest review of Running fire.