Web of Deceit by Susan Sleeman 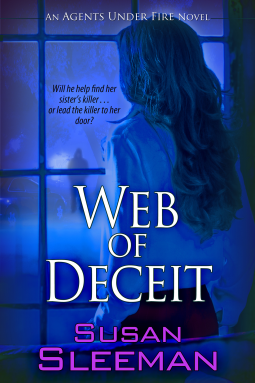 Will he help find her sister’s killer . . . or lead the killer to her door?

When FBI Agent Kaitlyn Knight discovers her brother-in-law is Vyper—the notorious cyber-criminal and murderer wanted by the FBI—Kait doesn’t question her duty to arrest him. But when he murders her sister in front of her, leaving her infant niece motherless, Kait vows to hunt him down and bring him to justice while raising the baby.
Three years later, and not even a whisper of a lead in her search, Kait is about to give up hope of ever finding Vyper. All of that changes when he goes on a murderous spree taunting Kait with clues that she and homicide detective Sam Murdock must solve before her devious brother-in-law takes another life.
As the body count rises, Sam discovers the killing spree is really about striking back at Kait. The killer is waiting, watching her every move—and he won’t stop until he’s exacted his revenge and reclaims his rights to raise his daughter.


My review: Web of Deceit by Susan Sleeman

Did not want to put the book down.  Has a lot of violence and gory murder scenes but good.  Liked the characters. Can't wait to see what happens in the next two books.  One place named the series Agents Under cover and another called it Agents Under fire.  Agents Under fire fits so much better than under cover.

Kait Knight is one of the main characters.  She had a twin Abby  who died three years ago instead of her.  She is raising her niece Lily.  Kait is a FBI Agent.

Sam Murdock is a homicide detective.  His murder might be Kait's brother-in-law. Fenton.  Sam does not talk about his past heart ache.

Fenton killed his wife by mistake three years ago.  He wants Kait to suffer like he has.  He also wants his daughter three year old Lily.  He is smart and a cyber crook.

This is full of drama, murder, suspense and even some humor.  It is a fast pace to catch the murder before he strikes again.

The setting is Portland, Oregon

Can't wait to read the next book in the series.

I was given this ebook to read by Net Galley and Bell Bridge Books.  In return I agreed to give honest review of Web of Deceit.
Posted by rhonda1111 at 1:22 PM