Slayed on the Slopes by Kate Dyer- Seeley 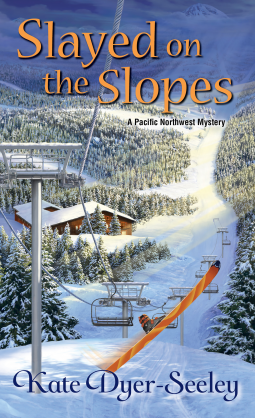 After talking her way into a job writing for Portland's Northwest Extreme magazine, Meg Reed may now really be in over her head. Actually, about 8,000 feet over her head. . .
She's at Mount Hood's remote Silcox Hut, covering the the seriously hardcore Ridge Rangers-- Oregon's elite high-altitude rescue team--during their four-day winter training. Sure, Meg beefed up her outdoor skills over the summer . . . but she's still hoping to cover the event with some hot chocolate by the cheery fireplace. Then, during a sudden blizzard, she swears she hears gunshots. No one stranded in the hut believes her . . . until self-absorbed Ridge Ranger Ben Rogers is found outside in a pool of frozen blood. Meg's now got to find this killer quickly . . . before cabin fever does them all in!

My review: Slayed on the Slopes by Kate Dyer-Seeley

This is the second book of the series but the first one I have read.  I like the characters.  The drama, the setting, action and mystery.  I was wrong on who I thought the murder was.  It was a clean read too.

Meg Reed is the main character.  She is single a writer that works for Portland's Northwest Extreme magazine.  She is not a athlete but is learning to be more outdoors to understand what she is writing about. She likes her boss.

Meg is at Mount Hood's remote Silcox Hut to cover the new hardcore Ridge Rangers training session.  They have a major snow storm come in and strand everyone up in the Silcox Hut.   The person who is sponsoring the elite high-altitude rescue team Ben Rogers is murdered.  Meg is one of the party that finds the body.

Megs father was killed awhile back.  He was a reporter too that was working on the drug scene in Portland.  There is mystery with him but more was probably told in the first book.

I liked the story and would read more about Meg Reed. I really want to find out more because of the file she read at the end.

I was given this ebook to read from Net Galley and Kensington Publishing Corp.. In return I agreed to give a honest review of Slayed on the Slopes.
Posted by rhonda1111 at 10:27 PM