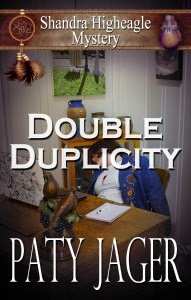 
On the eve of the biggest art event at Huckleberry Mountain Resort, potter Shandra Higheagle finds herself in the middle of a murder investigation. She’s ruled out as a suspect, but now it’s up to her to prove the friend she witnessed fleeing the scene was just as innocent. With help from her recently deceased Nez Perce grandmother, Shandra becomes more confused than ever but just as determined to discover the truth.
Detective Ryan Greer prides himself on solving crimes and refuses to ignore a single clue, including Shandra Higheagle’s visions. While Shandra is hesitant to trust her dreams, Ryan believes in them and believes in her.
Can the pair uncover enough clues for Ryan to make an arrest before one of them becomes the next victim?
My review: Double Duplicity: by Paty Jager (A Shandra Higheagle Mystery (Volume 1)
4 STARS
I liked Double Duplicity so much I went and bought the next book in the series.
It has a good mystery.  Likeable characters, drama, romance and action.  It is also a clean read.
Shandra Higheagle is a potter and lives on a mountain. After going to her grandmother's funeral  Shandra stops by a art gallery because the owner wants another vase she  finds a body.  The owner of the art gallery.  Shandra is the suspect.  She also saw her friend from leaving the area. Shandra is half Indian.  Her step-father and mother don't want her to say anything about her being part Indian or have anything to do with it.
Shandra starts having dreams about seeing her deceased grandmother who just died and clues about the murder.
Detective Ryan Geer believes in her dreams more than Shandra did.  Ryan is single.  He does not appreciate Shandra keeps trying to figure out who the killer was.

There is a lot of suspects,  I guessed wrong about who the killer was.

There sure a lot going on at the crime scene.
The setting is Huckleberry Mountain Resort town in Idaho.

I was given this ebook to read by author.  In return I agreed to give a honest review and be part of Double Duplicity blog tour. 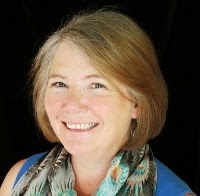 Award-winning author Paty Jager and her husband raise alfalfa hay in rural eastern Oregon.  On her road to publication she wrote freelance articles for two local newspapers and enjoyed her job with the County Extension service as a 4-H Program Assistant. Raising hay and cattle, riding horses, and battling rattlesnakes, she not only writes the western lifestyle, she lives it.
All her work has Western or Native American elements in them along with hints of humor and engaging characters. Her penchant for research takes her on side trips that eventually turn into yet another story.
Author Links:

I hadn't heard of this series before but it sounds really interesting! Thanks for the opportunity!

Thank you for reviewing, Double Duplicity. I'm glad you enjoyed it so much you went out and purchased the next book in the series.

This series sounds great. I haven't heard of it before now but would love to read it !