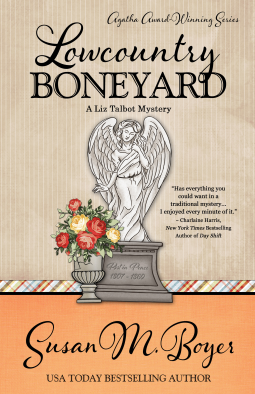 USA TODAY Bestselling Author - The AGATHA AWARD-WINNING Liz Talbot Mysteries
“Has everything you could want in a traditional mystery: a credible and savvy protagonist, a meaty mystery, and setting that will make you want to spend time in South Carolina. I enjoyed every minute of it.” – Charlaine Harris, New York Times Bestselling Author of Day Shift
Where is Kent Heyward? The twenty-three-year-old heiress from one of Charleston’s oldest families vanished a month ago. When her father hires private investigator Liz Talbot, Liz suspects the most difficult part of her job will be convincing the patriarch his daughter tired of his overbearing nature and left town. That’s what the Charleston Police Department believes.
But behind the garden walls South of Broad, family secrets pop up like weeds in the azaleas. The neighbors recollect violent arguments between Kent and her parents. Eccentric twin uncles and a gaggle of cousins covet the family fortune. And the lingering spirit of a Civil-War-era debutante may know something if Colleen, Liz’s dead best friend, can get her to talk.
Liz juggles her case, the partner she’s in love with, and the family she adores. But the closer she gets to what has become of Kent, the closer Liz dances to her own grave.
Books in the Liz Talbot Mystery Series:
LOWCOUNTRY BOIL (#1)
LOWCOUNTRY BOMBSHELL (#2)
LOWCOUNTRY BONEYARD (#3)
LOWCOUNTRY BORDELLO (#4) November 2015

This has good mystery, action, suspense, ghosts, murder and romance.  There is a few love scenes.
I like the regular characters a lot.  I have read now all three books in the A Liz Talbot mystery.  I would read more about Liz and company.

Liz is a P.I. her partner is her now boyfriend for two years.  They have a long distant relationship.  Liz can't tell him all the reasons why she can't move back with him to where they started their business. Because her best friend who died when they were 17 needs her help to keep her island safe.  Only Liz can see and hear Colleen.

Nate was Liz's brother-in-law and has been her partner for years.  He wants Liz to love him as much as she loved the other men in her life.  I like Nate and kept routing for them to work things out.

Liz is hired by a rich and powerful couple to help find there missing daughter.  She has been missing for a month.  The police have stopped looking because they are without anymore leads.  Liz starts investigating and right away she is threatened.

There are a lot of twists and turns before the end.  There is a lot of danger and some humor.  Which is usually caused by Colleen or Liz's family.

The setting for this book is North Carolina.  Liz and her family all live on a island.

I was given this ebook to read by Net Galley and Henery Press and in return I agreed to give honest review of Lowcountry Boneyard.


ABOUT THE AUTHOR
Susan M. Boyer loves three things best: her family, books, and beaches. She’s grateful to have been blessed with a vivid imagination, allowing her to write her own books centered around family, beaches, and solving puzzles wherein someone is murdered. Susan lives in Greenville, SC, and runs away to the coast as often as she can.
Her debut novel, Lowcountry Boil, won the Agatha Award for Best First Novel, the Daphne du Maurier Award for Excellence in Mystery/Suspense, and was an RWA Golden Heart® finalist. Susan’s short fiction has appeared in moonShine Review, Spinetingler Magazine, and Relief Journal among others. Visit Susan at www.susanmboyerbooks.com.
Posted by rhonda1111 at 8:26 AM