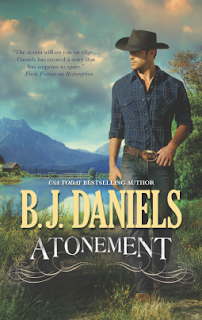 
Just how far are people willing to go to keep their secrets?

Protecting the citizens of Beartooth, Montana, is never an easy job. It's been one year, and Sheriff Dillon Lawson still feels guilty that he couldn't save his twin brother, Ethan. But the biggest test of his bravery comes when Tessa Winters arrives, claiming to be pregnant…with Ethan's baby. At first, Dillon can't decide if this beautiful woman is a con artist or a victim. If Ethan didn't die in that car crash, then where is he—and why is he hiding?

Now, Dillon is prepared to do anything to uncover the truth—anything except admit his growing feelings for Tessa. But with violence threatening, Tessa and Dillon must trust in each other to save not only themselves…but also Tessa's unborn child.

In Atonement has two story lines, One is dealing with the Sheriff and his ex-wife that has been in all four books of Beartooth, Montana. The other deals with Dillon Lawson and his dead twin brother. Also Tessa and her pregnant baby. The plot was good and kept you wanting to know what happens next.

The setting was Beartooth, Montana and surrounding states.

I liked the characters. I would think it be hard to love brothers especially twins. Dillon is a hard working honest man. He is acting Sheriff and his own small ranch. Ethan is the opposite of Dillon. In fact he is dishonest and died a year ago.

Tessa Winters is eight month pregnant and she has found Ethan the father of her baby. She wants the money he stole from her and sign his rights away to the baby. She can't believe she fell for Ethan lies. Now she and the baby could be in danger.

Their are a lot of characters that are new. Their is also others that we have met in Beartooth Montana. The Sheriff Frank who is wanted for murdering his ex-wife. Nettie the grocery store owner who has loved Frank for years.

Their are a few murders that happen in the book both in story lines.

I will read more books by B.J. Daniels in the future.