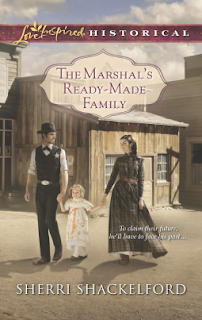 
A Marriage of Necessity

Garrett Cain will lose guardianship of his niece, Cora, if he stays single, but he knows no woman could accept the secrets he's hidden about his past. The lawman can't jeopardize Cora's future by admitting the truth. Yet when unexpected danger in the small town threatens to expose Garrett's long-buried secret, only a leap of faith can turn a makeshift union into a real family.

I really like JoBeth's character. She is fun, caring, smart and can out shoot all her brothers. She is not afraid to beat the guys and be true to herself.

Garrett Cain has secrets in his past. He is afraid he will be like his father. He is willing to fight for the best thing for his little niece who just became a orphan.

Cora is a character you wished you could comfort her. She has bonded fast to JoBeth after she arrived in town before her Uncle came for her.

I like JoBeth's big family and I hope we will get to see them again sometime.

This is a clean historical romance set in the Wild West. Marshal Cain is the new Marshall to clean up the area after the last Marshall was arrested.

Garrett and JoBeth are attracted to each other but afraid to show it.

Their are good characters that I cared about. There is plenty of action and drama.

I would read another book from Sherri Shackelford in the future based on this book.