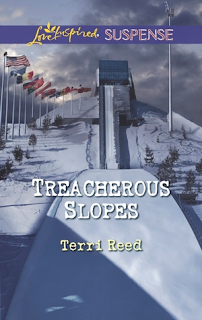 A champion ski jumper, Nick Walsh wants one thing: to win the gold for his late brother. Nick has always blamed himself for his family's tragic loss—and so does everyone else. To complicate things, sweet and shy reporter Julie Frost insists on doing a story about him. But as Nick gets closer to achieving his dream, someone will do anything to stop him. Somehow, Nick must keep Julie from getting too close as they confront a threat that can destroy them both. Julie and Nick are on the verge of discovering the truth about his brother's death…unless an unknown murderer finds them first.

Treacherous Slopes is full of action, danger, grief, suspense and some romance. It starts off strong and keeps going until the end. I guessed part of the suspense and was surprised at others events that happened. It is also a clean read.

I like that Nick is a strong character. Someone is trying to kill him. He is favored to make the U.S. ski team again. His first jump goes wrong and he figured that who ever is after him as struck again. He does not want anyone to get hurt because someone wants to kill him.

Julie has her first reporters job. She has pitched the story of local skier Nick Walsh was home again and favored to make the team. She plans to interview him. Julie and Nick went to the same high school and even worked together in some classes.

Nick lost his younger brother a year ago on a ski jump. Since some reporters were banding around that he did drugs and ruining his good name when he is not around to do it himself. Nick does not want to be interviewed.

Nick has a fan that comes to a lot of his competitions. Kitty is sure that Nick will love her too.

One of the attempts on Nick's life creeped me out. I would have run and screamed too.

I liked reading Treacherous Slopes. I would read more of Terri Reed's novels based on it.