No Way Out (The Justice Agency book 3) by Susan Sleeman 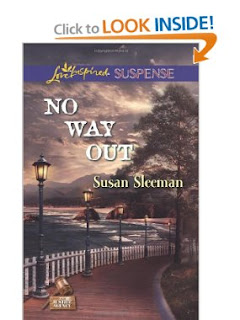 Today was a good day and a bad day to read this story. (April 15, 2013) Susan wrote the book with "Isaiah 26:3 You will keep in perfect peace those whose minds are steadfast, because they trust in you." Because with trials the only peace is through God. The bad part was it had a explosion in it. A little to vivid in my mind today.

The plot is simple with some twists to it that were unexpected in some ways. I really like the characters. I liked how Alyssa was turning to prayer and relying on God. She still had to deal with her problems and her reactions were real. It was preaching but sharing what helped her get through her trials.

Alyssa has been a widow for two years now. She has twins Brianna and Riley in first grade. Her husband was a cop and drug dealer or so everyone thought. Alyssa went back to work selling real estate and were living rent free in a duplex that her husband's partner Nolan owned.

Alyssa was running at night after work and she heard Nolan and two others below the path she was on talking about her husband's death and framing him as a drug dealer. She knows that at least 2 of 3 men were cops. She made a sound and they started up the hill after her. While hiding from them in her secret spot she found someone already their. He owns a gun. Cole Justice private investigator.

Cole believed her that someone was chasing her and her life was in danger. He got her back to his house that he was renting and
Dani his sister a P.I. also was their. They made a plan to keep her safe.

Cole served two tours in Iraq and that has changed him a lot. He wants to keep everyone safe and thinks he has to be in control. Cole blames himself for his friend dying and his survival. He has not had a lot to be happy about.

This has lots of action, drama and lots of bad guys with lots of power, but also some good guys and girls who are willing to protect others who can't protect themselves and do the right thing. This is a clean read. Good reminder to turn things over to the Lord and ask for help.

I was given this book by the author Susan Sleeman and asked to give honest review of it when finished.
Publisher: Love Inspired (May 7, 2013) Harlequin 224 pages ISBN-10: 0373445393
Description below taken off of Goodreads.

Who can she trust? Alyssa Wells has uncovered evidence that her police officer husband was murdered by his partner—a dangerous claim in a small town. After two tours in Iraq, protecting Alyssa and her children shouldn't be a problem for private investigator Cole Justice. Alyssa feels drawn to him, but how can she trust anyone after everything she's been through? Cole's sure his heart is closed off to love, but Alyssa and her children seem to have found a way in. As the killer draws closer, Alyssa realizes she's trusting Cole with more than her safety.
Posted by rhonda1111 at 3:59 PM