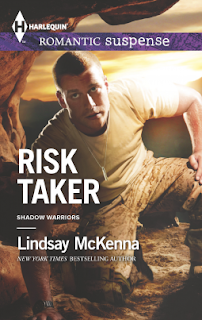 In the mountains of Afghanistan, her daring rescues have made Medevac pilot Sarah Benson a legend. She loves taking her helicopter where others fear to fly—the danger, the adrenaline…and the distraction from thinking about her own hurt heart.

U.S. Navy SEAL Ethan Quinn is man enough to prize Sarah's valor as well as her beauty. But his efforts to reach his beautiful colleague cannot pierce her armor. Can he prove that it's possible to find love in a war zone?

Risk Taker is very well told drama. Their is so much action, drama, romance in this story. I really enjoyed the ending. The characters are really likeable and heroes. There is a lot of poetry in this book that I liked but am not a good judge of poetry.
There were a few love scenes that I skipped over.

Sarah Benson is a Medevac pilot that takes some risks to save soldiers hurt in battle. Even when she is warned to stay away by her commander till it is more safer to go into rescue the wounded men. Sarah on one hand is brave and courageous. She turns away any man from her because she has learned not to trust them.

Ethan is a navy Seal who risks his life all the time. He has hidden side to himself he writes poetry. He is attracted to Sarah like most men in the bar. When four men try to harass her he steps in. Then later rescues her again. He knows she is careful around men. So he decides to sneak poetry to her tent each morning that he can.

The drama catches what it might be over in Afghanistan. It was believable to me. How men and woman are doing their best but there are always a few bad bunch in any group.

I can't wait to read Degree of Risk the other book that features Sarah and Ethan that will be out in March 2014.

The setting for this book is Afghanistan.