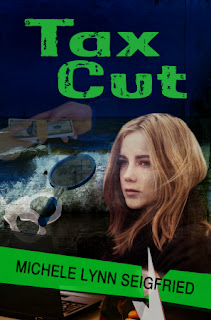 You’ll L.O.L. because Municipal Clerk Chelsey Alton is at it again! Working for a government riddled with crime, she and her sidekick Bonnie investigate to find out the answer to the pressing question: Who killed Vinny Buttiglieri? She finds herself entangled with dangerous mobsters and corrupt politicians. She thinks she’s doing the right thing, but can she save herself when she becomes entrenched too deep in this Jersey shore mystery? Michele Lynn Seigfried is an award-winning novelist, children’s book author/illustrator and public speaker who was born and raised in New Jersey. In her mystery novels, she draws from her personal expertise in the area of municipal government, in which she has served for over 15 years in two different municipalities. She holds a B.A. in communication from the College of New Jersey with a minor in art. She obtained the Master Municipal Clerk certification from the International Institute of Municipal Clerks in 2010. She also holds the Registered Municipal Clerk certification and Certified Municipal Registrar Certifications from the State of New Jersey.

I was always trying to figure out who or what was going on. It unfolded the mystery a little at a time.

Chelsey Alton heard through a friend that a job in her field was open because the last one was murdered.
Chelsey decided to go back to work because of the job opening. As a Municipal Clerk for Coral Beach. It was close enough to commute to work and her parents could babysit her daughter. Chelsey's finds a letter from the previous clerk that say's if he is dead it was his bosses fault.

Chelsey is a single mom of a two year old. She is excited to date a guy she met at New Year's Eve party. He is a single father too. Her first day on the job she meets a guy who starts stalking her. A Seenior citizen that has memory problems calls complaining about too many birds, tooth fairy, dead bodies. Her bosses are not that friendly. Maybe the mob is involved with the clerk's death.

Also the previous secretary had quit before she came to work so she told her friend Bonnie about the job who she worked with before about it. Bonnie is married to a Doctor but she likes to look and flirt with other guys. Bonnie is funny and likeable.

The setting is on a island in New Jersey.

The pacing is good and unfolds the story at a steady pace. I think I would have reported her stalker right away when he would not take a no.

I would like to back and read the first book Red Tape in the series and see how it all unfolded too. I would read another book in the series.

Their is drama, action, romance and lots of humor in Tax Cut.

I was given this ebook to read and in return for being part of its book tour and to give honest review of Tax Cut.

To enter comment below with name and email address. The Winner will have two days to respond to email. If no response a another winner will be chosen. Contests starts Feb. 15,2014 and ends Feb.22, 2014.

Thanks for hosting me on your blog today, Rhonda!

Thanks for the chance to win
Pryfamily5@gmail.com

A new mystery to enjoy. Thanks
libbydodd@comcast.net

Libbydodd won you have 2 days to respond to email.