Promise of Rain by Rula Sinara 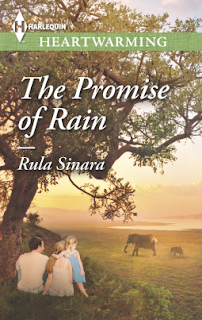 Description
He wants to take her child out of Africa…

The Busara elephant research and rescue camp on Kenya's Serengeti is Anna Bekker's life's work. And it's the last place she thought she'd run into Dr. Jackson Harper. As soon as he sets eyes on her four-year-old, Pippa, Anna knows he'll never leave…without his daughter.

Furious doesn't begin to describe how Jack feels. How could Anna keep this from him? He has to get his child back to the States. Yet as angry as he is with Anna, they still have a bond. But can it endure, despite the ocean—and the little girl—between them?
File Size: 466 KB
Print Length: 175 pages
Publisher: Harlequin Heartwarming (January 1, 2014)
Sold by: Amazon Digital Services, Inc.
Language: English
ASIN: B00E1V5VU8


My Review: Promise of Rain by Rula Sinara

I would love to go see the animals in the wild. The baby elephants seem so loveable. How can people just kill the elephants for their tusks. This romance takes place on a Busara elephant research in Kenya mostly.

The characters seem real with real hang ups. I like Anna and can see how hard it would be to finally tell the truth to everyone about having a daughter. I can't imagine hiding a daughter for 5 years from everyone.

Anna is doing research on elephants sounds also she is raising rescued elephant orphans after their parents are killed. She is raising her four year old out in the wild.

Jackson Harper is asked to go and see how her program is doing. It will give his project some of her funding. He is surprised to find out she has a daughter that is his. Anna was his best friend growing up. He can't believe she hid this from him.

Pippa is four years old. She is raised at a elephant research camp. She is darling. Her friend is a year older and his mom is her nanny.

This is a clean romance. Also enjoyed reading about the elephants.

I would read more books by Rula Sinara in the future based on this book.

I was given this ebook to read and asked in return to give honest review by Netgalley.
Posted by rhonda1111 at 2:44 PM