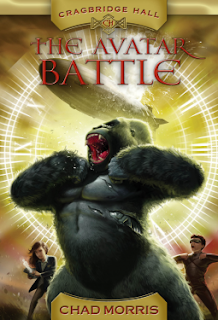 The adventure continues when Abby and Derick begin their second semester at Cragbridge Hall, the most prestigious secondary school in the world. But when Grandpa Cragbridge admits them to the Council of Keys—a secret group of people who have keys to travel back in time—strange things begin to happen. One by one, members are found unconscious and unable to wake, their keys stolen. Now Abby and Derick must scramble to figure out who is behind the attacks before they become the next victims, which would give their enemy the power to change the past forever.

A page-turning, time-travel adventure that teaches powerful lessons about choice and consequence, believing you can do hard things, and valuing history

My Review:Cragbridge Hall: The Avatar Battle by Chad Morris

This sequel stands up to the first book. I did not put the book down once I started reading it. It is full of imagination, fun history facts, heroes, fun inventions, battles. It is full of adventure, and a clean read.

The plot starts out with second semester starting at Cragbridge Hall. A school for genius. Abby's grades are not good. Some don't think she should be in the school at all. That she got in just because her Grandfather pulled strings. Muns sends message to the four teens that helped defeat is plan to change history last time to stay out of his way. He is determined to change history in big ways. To do that he needs to get two keys.

They can watch history at Cragbridge Hall from any angle or point of time. It would be fun to watch some history like that and would make me want to learn more.

Abby & Derick's are in danger even while they are at school. But they don't want to stay back and do nothing to help stop Muns.
While Abby is at the bottom of the class the same can't be said for her twin Derick. He is super smart, and most things come easy for him. Derick wants to be in the special avatar group after school and tries out for it.

Besides learning about history, exploring your world it also had some good lessons being taught.
I would definitely read more books in the Crabridge Hall series in the future.
I was given this ebook to read for purpose of giving a honest review of it.
publication: March 4th 2014 by Shadow Mountain 352 pages
ISBN:9781609078096
My review Cragbridge Hall, Book 1: The Inventor's Secret by Chad Morris can be found here http://readalot-rhonda1111.blogspot.com/2013/04/cragbridge-hall-book-1-inventors-secret.html

Thanks so much for your review, Rhonda! I'm so glad you enjoyed it. Keep up the great reading and reviewing.