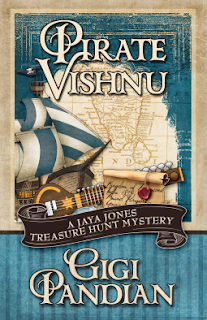 A WHIRLWIND OF ADVENTURE

“Fast-paced and fascinating as Jaya’s investigation leads her this time to India and back to her own family's secrets.” —Susan C. Shea, Author of the Dani O’Rourke Mysteries

A century-old treasure map of San Francisco’s Barbary Coast. Sacred riches from India. Two murders, one hundred years apart. And a love triangle… Historian Jaya Jones has her work cut out for her.

1906. Shortly before the Great San Francisco Earthquake, Pirate Vishnu strikes the San Francisco Bay. An ancestor of Jaya’s who came to the U.S. from India draws a treasure map…

Present Day. Over a century later, the cryptic treasure map remains undeciphered. From San Francisco to the southern tip of India, Jaya pieces together her ancestor’s secrets, maneuvers a complicated love life she didn’t count on, and puts herself in the path of a killer to restore a revered treasure

Part of the Henery Press Mystery Series Collection, if you like one, you'll probably like them all...

Gigi Pandian is the child of cultural anthropologists from New Mexico and the southern tip of India. After being dragged around the world during her childhood, she tried to escape her fate when she left a PhD program for art school. But adventurous academic characters wouldn’t stay out of her head. Thus was born the Jaya Jones Treasure Hunt Mystery Series. The first book in the series, Artifact, was awarded a Malice Domestic Grant.

I enjoyed reading Pirate Vishnu. The mystery kept you guessing the whole way through the book. I liked the characters.
I was disappointed that we did not see more of Lane. We do get to see a lot more of her best friend Sanjay.

Jaya Jones is teaching at a college. She is working on a paper to get published. Their is another teacher that is trying to get tenure too. Only one of them will be picked.

One day a older gentleman Steven Healy comes into her office with a treasure map and tells her Great Uncle Anand that she thought of as a hero was a thief and had stolen from his family. He wants to read his letters to get clues what he did with the treasure.
He agrees that she can keep the map for a day. He agrees to meet her back in her office the next day. Then he will tell her more about the missing treasure. He gets murdered that night.
Jaya gets mugged that next day and the map, her computer and phone stolen.
The police question her about Steven's murder and when she had met him and why.
Jaya decides to check more into her Uncle's death which was the week of San Francisco 1906 earthquake and fire.

It is exciting. She ends up going to India and runs into a lot of the same people from San Francisco.
Lane thinks she is in danger from one person and Sanjay from
a different person.
Their is humor, history of San Francisco and India, pirates, magic, danger as they rush to figure out what is going on. Some surprises that I did not see coming and a some that I did see.
I hope to see more of Jaya Jones in the future.
I was given this ebook to read and in return to give honest review from Netgalley and