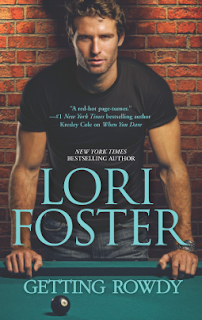 This is book #3 in Love Undercover series by Lori Foster. So lots of old characters are back plus a lot more. This story is steamy hot. There are a lot of love scenes that I skipped over. It also had lots of drama, some action, some really sweet tender scenes.

The plot is centered around the bar Getting Rowdy. Rowdy the new owner wants his bartender but she is always turning him down but he finds lots of other one night stands. Rowdy uses sex to get through tough times.

The bar used to be a place where you could get drugs easy. Rowdy has been cleaning up the area.
One customer who made deals with old owner wants Rowdy to make good on the deal. When Rowdy finds out the guy brought is little kid Marcus with him goes outside to talk to him.

Avery gets Marcus inside. Rowdy ends up fighting the guy and a second guy comes out with big knife and cuts Rowdy's back before he gets both of them taken care of.

The drug dealer had lots of drugs and guns in his car so his kid will be safe. Rowdy sees himself in Marcus and wants better for him.

Reese one of the cops that he has been friended by because of his sister Pepper's marriage to Logan another detective. He gets emergency custody of Marcus. His mother was found overdosed. Reese's wife Alice and Marcus start connecting right off the bat.

Pepper stays with Rowdy after he gets hurt to help take care of him. Then Pepper's past comes to be a danger to her and Rowdy wants to keep her safe with him.

I like all the different characters and how they are helping each other out. I was surprised by some of the twists in the book. Can't wait to see if Dash or Cannon is the next character to get his story told.

Charismatic bar owner Rowdy Yates isn't the kind of man women say no to. So when he approaches waitress Avery Mullins, he fully expects to get her number. However, the elusive beauty has her reasons for keeping her distance—including a past that might come back to haunt them both.

Avery spends her nights working for tips…and trying to forget the secret Rowdy is determined to unearth. But when history threatens to repeat itself, Avery grows to rely on Rowdy's protective presence. As the sparks between them ignite, she will be forced to choose between the security she's finally found…and the passion she's always wanted.
Posted by rhonda1111 at 7:09 PM