Twelve to Murder (A Mac Faraday Mystery) by Lauren Carr 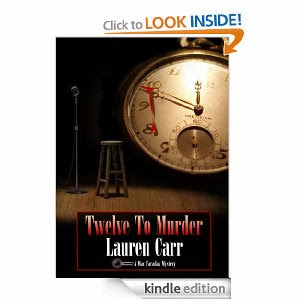 Two people are brutally murdered in their summer place on Deep Creek Lake. Suspected of the murders, former child star and one-time teenybopper idol Lenny Frost takes innocent bystanders hostage in a local pub and demands that Mac Faraday find the killer. Can Mac save the hostages and himself from the wrath of the enraged has-been by piecing together the clues in less than twelve hours, or will it be a fatal last call at the stroke of midnight?

My Review:Twelve to Murder (A Mac Faraday Mystery) by Lauren Carr

Twelve to Murder is latest Mac Faraday Mystery. It has good suspense, twists & turns, humor, Gnarly and gang. It makes you want to come back and visit. Lots of action, mysteries even some cold cases on the west coast. I did figure one case out but not the others.

Mac Faraday was left millions from his birth mother, Gnarly. Mac was a homicide detective. Now he helps out the local police chief when murders happen locally.

Gnarly a German shepherd is a thief and a smart dog.

The plot is a double murder with the victim writing a name in blood. David calls Mac into help. Then the suspect takes a bar hostage and asks for a famous fictional character that Mac's mom wrote that looks a lot like Mac. So Mac goes into help and he is told to solve the murder in twelve hours or he will kill all the hostages.

A minor plot is Mac and Archie have a fight sort of. She wants to plan the wedding and set a date. Everyone finds out and comments on it.

If your already a Mac Faraday fan you will want to get Lauren's newest mystery. If you have not read one do pick one up. It can stand alone.

The setting is a small resort town with a lot of rich peoples homes or second homes.
It is fast paced.