The Spider Catchers by Marilynn Larew 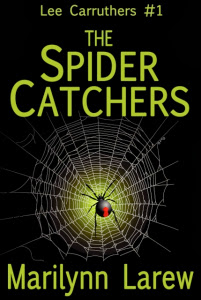 The Spider Catchers
by Marilynn Larew

The Spider Catchers by Marilynn Larew

“A solid introduction to a new thriller series.” Kirkus Reviews

What do the violent takeover of Fez brothels and a new stream of terrorist funding have to do with the disappearance of Alicia Harmon from the Fez office of Femme Aid Maroc? When CIA analyst Lee Carruthers tries to find out, she is swept into a tangled web of dirty money and human trafficking, and people will kill to find out what Alicia knew. If only Lee knew. She’s working blind, and in this case, ignorance is death. Her search takes her through the slums of the Fez medina to the high-rises of the new city and finally to a terrorist camp in the Algerian desert.

Marilynn Larew was born in Omaha, Nebraska, and after a living in a number of places, including the Philippines and Japan, she finally settled in southern Pennsylvania, where she and her husband live in an 150 year old farmhouse. She has taught courses about the Vietnamese War and terrorism at the University of Maryland and travelled extensively in Europe and Asia. She likes to write about places she has been or places she would like to go. She has published non-fiction about local history, Vietnamese history, and terrorism. This is her first novel.


My Review: The Spider Catchers by Marilynn Larew

This is a mystery that is gritty dealing with spies, terrorists, sex trade that keeps you guessing about who are the good guys and bad guys.
Lee Carruthers is CIA analyst out of Paris who is sent to Fez to look for another CIA Alicia that has gone missing their for over two weeks. Lee used to be out of Fez so she had lots of contacts still. No one knows exactly what Alicia was doing or when she had disappeared.

Dealing with slavery, terrorists in that area of the world is a lot of violence. Lots of action, drama, blood. Lee gets attacked right away by different people and groups. As she tries to follow Alicia's trail.

I like Lee's character she is tough, does what is necessary and falls apart after the fact. She thinks on her feet.

One thing they sure drink a lot of coffee and tea with everyone all the time. I don't drink either and would not like to drink them especially when in a desert.

The setting goes from Paris, Fez, Morocco and other countries in the area.

I was given this ebook for purpose of reviewing it and being part of its blog tour. The opinions are mine.