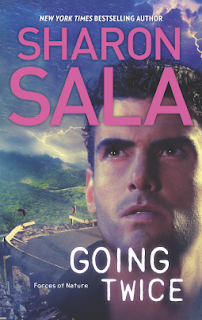 As bodies pile up in the wake of a storm—stripped, tortured and grimly posed—authorities must admit the unthinkable. The serial killer dubbed the Stormchaser has returned following a tornado and taken it upon himself to bring the death toll up to where he believes it belongs.

FBI investigator Wade Luckett is back on the case, assisted by an agent Wade knows professionally and personally: his ex-wife, Jo. Neither time nor the tragedy that tore them apart have blunted the ache Wade feels for brave, beautiful Jo. And though she tries to deny it, she feels the same. But the stirrings of renewed romance will have to wait until they catch a killer.

The Stormchaser has no intention of getting caught. He's set his sights on a new victim. Jo can forget about the lifetime she dreams of spending with Wade. She'll be lucky to see another day.

Going Twice is the middle book of three. I did not read Going Once but I would like too now. It can stand alone but you will want to read the next book too. The story is good. Lots of drama, action, and even romance. A few sex scenes that I skipped over.
Main plot is a serial killer is on the loose called Stromchaser. He follows natural disasters targeting survivors and killing them. He taunts the 3 FBI Agents.
In Going Twice a fourth agent is assigned to the team. Is Jo Luckett. She is Wade Luckett's ex-wife. They are on the same team and have to work together. Their marriage ended after the death of their baby. It starts out tugging on your emotions right away.
I like the four FBI Agents. The emotional drama is mainly between Jo and Wade this book. Jo has a lot of guilt to work out.
Jo brings fresh eyes to the team and is a big help to them. She is tough and smart.

This book makes you feel when you read it all kinds of emotions from sad, happy, compassion and wanting them to catch the Stromchaser.
Their are a couple of story lines that you can guess what is going to happen next, but is still very good and suspenseful.
I did not want to put the book down and can't wait till the next book comes out.