A Texas Hero by Linda Warren 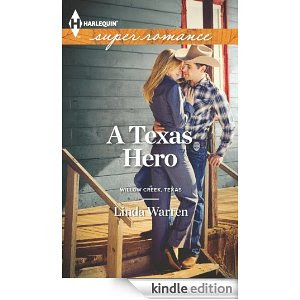 This book left me with a smile. I really like Ethan's father language shazam! The plot had some nice twists, I guessed who the third man was pretty soon. Not all the motives though. The characters I loved especially all the minor ones. I hope we get to see some of them back in the other books of the series. Their was a few love scenes I skimmed over and one really dirty scene where they were covered in mud.

Abby is divorced mother with Chloe a three year old. She is running late because her ex called and said he could not take Chloe like he planned. Abby had to call her father for help with baby sitting. On her way to work she was frustrated and passed her exit and stopped in the middle of the road and was rear ended. She got off the phone and told the angry truck owner that she would meet him over by the bank to exchange information. The bank was in sight.

Ethan was on his way home after working all night to go spend time with his daughter he just got custody. He was not in the mood to be in a accident. He followed. as she was giving her name on a card & number the branch manager was about to unlock the door when two men jumped out and made them all go inside. It was a robbery.

The bank robbers heard sirens and they grabbed Abby and were forcing her into their van. Ethan said why don't they take him instead of her and they made both get in. Ethan and Abby were calm. Hours later they were taken inside a rundown cabin in the middle of nowhere. Ethan heard the bank robbers one of them wanted to take Abby with them. Ethan got him and Abby out of a broken window and they ran into the woods. They hid by a down tree. After awhile the bank robbers left them in 102 heat with no water. They started walking out.

Ethan is a detective working homicides. His partner and another friend a cop started working the case. They informed their families that they were kidnapped.

Ethan lived with his dad Walt on a ranch with his twelve year old daughter that he was just getting to know Kelsey. Walt is trying to clean up his language calling people baboons, shih Tzu ect. Kelsey is behind in school. She has never been in one school for a whole year. She is angry and scared at the new changes.

Abby is close to her father Everett but does not get along with her stepmom Gayle. She has never spent a night over at their new house. When ever Abby calls her dad to babysit it causes problems with Gayle. But Everett loves to see his granddaughter and Abby.

Some of the characters you don't like at first but the more you know the more you like them. The bank robbery and kidnapping made changes in a lot of ways to the people around them. I can't wait to read the next book in the series.

Falling for her protector
For single mother Abby Bauman, a failed marriage and a troublesome ex are proof of love gone wrong. But once she's caught up in danger and saved-twice-by take-charge detective Ethan James, she considers whether falling for a true-blue hero is worth the risk. Even now, after the rescue, he seems bent on continuing to protect her and her daughter. Why?

There's more to Ethan's determination to stay close than he's telling her. But when she confronts him, he proves she's more than a means to solve a case. That tempts Abby to take a second chance on trust-and love. Which might be the best choice she's ever made.