One Night Heir by Lucy Monroe 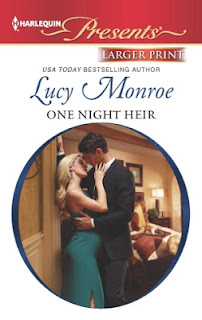 
One Night Heir is a fast enjoyable read. There are love scenes which I skimmed over. A familiar plot but good. I like Gillian and Maksim. They both have been scarred by their parents about love.

Maksim is a Crown Prince and he is about to ask his girl friend to marry him when he gets her medical file and it shows that it would almost be impossible for her to become pregnant. He knows he needs to brake it off. He hopes she will do it for him. When after dinner she invites him in he wonders if it will be a good idea.
That night for the first time he doesn't use a condom for the first time.

Gillian is expecting a proposal not a goodbye. She has not read her medical file. She is heart broken and having flue that won't go away. She goes to doctor and is shocked at finding herself pregnant when just weeks ago told she could not have children. Gillian fears miscarriage so does not plan to tell anyone till after 3 month mark.

Maksim has tried to date other woman but misses Gillian. When his cousin Demyan tells him what their hacker has found out about Gillian medical appointment visit. He knows he is the father. He goes to Gillian's apartment and proposes marriage. He is shocked when she says no not yet. She will decide after the first trimester is over.

I want to read Demyan story next to see what he is really like. I like Lucy Monroe stories. Just not all the sex scenes.
I was given this ebook to read and asked to give honest review of it in return by Netgalley.
publication: June 18th 2013 by Harlequin Presents 256 pages ISBN:0373239254


Description below taken off of Goodreads.
Only a royal wedding…Bitter life lessons have taught Crown Prince Maksim Yurkovich that duty must come before desire. His country needs an heir, so when he discovers his lover can't have children, he must sever their ties. Only Maks can't resist spending one last night in her bed.

…can avert this royal scandal!

Now he faces the biggest diplomatic crisis of his life. Against all odds, Gillian Harris has become pregnant. Maks's royal reserve masks the heart of a fierce Cossack warrior—one who is not above using their mutual passion to convince a hurt, wary Gillian that she must be his queen!
Posted by rhonda1111 at 10:26 AM