All That Was Promised by Vickie Hall 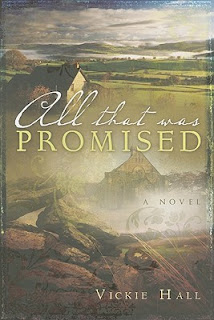 All That Was Promised was good. I have read simalar stories like some of these type of incidents in my own family histories about conversions in Wales to the Church of Jesus Christ of Latter Day Saints. So to me the book was very personal to my life. Don't know what choices I would make if I lived at that time.

It starts in spring of 1847 Cardiff, Glamorgan, Wales with the Reverend Richard Kenyon at church one sunday. His Brother Robert,his wife Abigail and daughter Amelia are going to start going to a different church with a richer class of people who can help them in business.

Reverend Kenyon and his wife Leah will miss seeing their 14 year old niece Amelia so often. So far they have not been able to have children. Amelia will miss them. She is not close to her parents.

Robert does not love his wife. He married her for her money. He wants to be more than he is. He runs the business that his father left him, selling tea. Abigail wants to be seen with the best people,own the best. She is not happy and is always belittling Amelia and Robert.

The Reverend Kenyon was running errands when he saw a crowd around a man standing on a rock preaching, He listened for a bit and than someone through a rock and hit him. The Reverend wanted to know more so he took him home and listened to him while they gave him first aid. They talked for hours. Reverend asked so many questions that he had and wanted him to come back the next day.

Leah could not believe her husband was actually listening and believing him. She complained to her sister Claire. When Claire realized that her brother-in-law was the one asking questions and wanting to know more. Claire trusted him and if he was willing to listen than she and her husband were going to come listen too.

Reverend Trahern was minister in the better off church that Robert and Abigail were now going too. He was preaching about the evil Mormons and wanted them stopped and telling lies about what they believed and were doing.

Ben Lachlan was the missionary to Wales that Reverend Kenyon met. This was his third mission. He and his wife sacrificed so much. He was not with his wife when his two sons were born.

This book has some great characters that I wanted to know what choices they make and why. Their are a lot more characters. I really liked how well they were written.

This story tells of the suffering the converts went through. How they were beaten,robbed and many trials they had because they were following what they believed. Some faced so much hardship. Some were stopped from joining the church because they could not handle the perscution.
Also told some of the joy and blessings they received. I know this book is fiction but some of the trials and blessings were based on real events that happened back in the early years of the church.

I admit that I am a Member of the Church of Jesus Christ of Latter Day Saints. Right now my daughter is serving a mission for the church. I am glad that she is not having rocks thrown at her. It is hard for me to see all the hate that goes in to stop the gospel or even understand it.

I am excited to read the next book in the series to see what happens to the characters next. Who will leave Wales and who decides to stay.
I was given this ebook to read and asked to give honest review of it when I was through.
Published January 8th 2011 by Bonneville 231 pages ISBN:1599554798

Discription below taken off of Goodreads.

When a Methodist minister meets a Mormon missionary, his life is changed forever. But this new convert soon finds himself struggling to recognize the promised blessings of the gospel when violent persecution shakes the fledgling Church in Wales. Told with passion and heart, this triumphant tale is guaranteed to uplift and inspire.
Posted by rhonda1111 at 10:35 AM