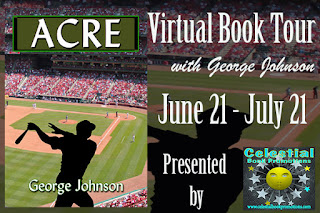 My Review of Acre
4 STARS

Acre is a fictional baseball player. I have to admit to crying a few times in the book happy tears and sad tears. Some of the book I thought repeated information too much. I know that some of it is necessary when Acre does the same things years after year for his ten years in baseball.

I really got involved in Acre's career. I was rooting for him to break records, win the world series, hit homeruns. I was sad when he lost and did not meet his goals for the year. I was impressed at all his hard work. He put hours everyday into practice his hitting and fielding. He was always studying the game of baseball and ways to improve his game. He was not willing to be satisfied with hitting 400.

I think fans of baseball will enjoy this book a lot. Also fans who like good positive characters will enjoy Acre. It has a lot of baseball history and facts told in a good story.

Acre at young age loved to hit a baseball. When he was left a sum of money when a relative died with his parents control until he was ready for it. His parents did not want to tell him till he was way older but did ask him if he could have one thing he really wanted what would it be? Acre wanted a batting cage.

Acre's dad was an engineer so he bought the supplies and rigged it out and made it as safe as he could. Acre would hit for hours each day. He started with slow speeds and worked up to different speeds as he could. His dad figured out different ways to help Acre to practice different things to help him get better.

Logan owned the farm next door to Acre's farm. He played professional ball for a few years. He was always sharing tips with Acre. Helping him to get better and better. Logan had two daughters the oldest was Sharon.

Sharon and Acre spent a lot of time together. She would help him practice. He would go to places that she liked. They spent a lot of time just talking on her front steps. They were excited when they would both be together in high school and could eat together every day. Acre planned on spending their future together. He was not interested in dating anyone else.

To me Acre was a real person. He worked hard and had good morals and when he said he would do something he would do it. He was always willing to help when he could. Some of it in secret and some he used his name and face to help children. He would go visit people in the hospital and retirement homes. I liked reading Acre and look forward to reading more books from George Johnson in
the future.

I was given this ebook to read and in exchange be a part of its blog tour and share my honest review of Acre. 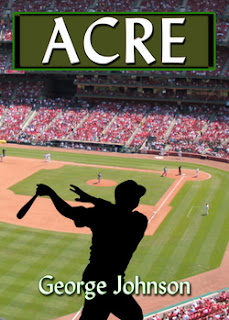 In Acre, George Johnson takes readers back to a nostalgic time in America's history.

Remember When Baseball Really Was America's Past Time?

Acre Thomas Tulley proved to be a product of his time. In the late forties and early fifties, back before laptops and computer games, he was outside more than indoors. He spent hours on the railroad tracks hitting cinders with a stick. Afternoons were meant for swinging at corn cobs or having cob battles between the barn loft and the cow pound with his friends. Acre, George Johnson's debut novel, is about a boy from the heartland of America, who grows up to become baseball legend. It is a story that takes readers back to a time when family was everything, contracts were sealed with a handshake, and a man was as good as his word.

From swinging sticks at cinders, Acre grew up to hit baseballs with his bat. From the beginning, Acre Thomas Tulley set his goals high. He was still a teenager when he accomplished feats in major league baseball never achieved by any other player in the history of the game.

Keeping to his good family roots, Acre never forgot a promise he made early in his career. But now, after achieving a legacy that will remain a benchmark for many years to come, will Acre Thomas Tulley walk away to keep that promise? Can he?

He thought about Acre for two years before he finally put it in writing.Then, it took him three years, off and on, to complete it and put it in print. Being a late starter, the author completed his second book of fiction called Timber. Acre and Timber are brother and sister. Timber took him two years to complete.

At the present time, he is compiling a collection of short stories he has composed over the years. George Johnson lives in Hagerstown, Maryland with Sharon, his wife of fifty-four years.
Posted by rhonda1111 at 7:24 AM