The Siren's Secret (The Shapeshifter's Secret, #2) by Heather Ostler 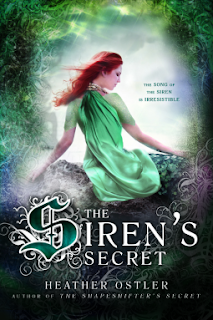 The Siren's Secret is book 2 in the Shapeshifter's Secret series. But I think it does do well to stand alone, because I forgot most of book 1 Shapeshifter's Secret. My memory is not what it used to be. Julia has lots of problems to deal with this year. She has some good friends and some new friends too. It is a exciting adventure with secrets, powers, love triangle, sword fights and school.
The characters are rich and not many of them are human.

Julia is in boarding school where she is learning about her weretiger learning how to shift faster and control herself. Her mother is at the head of the guild and wants to kill her or at least use her. Her father Lancer is in charge of soldiers union who are fighting the guild. Lancer is royalty but he gave up his chance to rule to save Julia's life years ago.

Julia is kidnapped and taken into a pond of water which is a portal to the Siren's home. She is taken to the Queen of the sirens. She is told she is half siren. Julia finds that hard to believe than realizes she has been breathing and talking in the water. She is taken back to school and told if she wants to visit again and have more questions just come to the pond and call Riley. She will help her.

Julia is found when she returns right away and taken to her father and tells him about her being a siren and that her mom was a siren as well. Lancer tells her not to tell anyone else about her being a siren. Siren's are not trusted and are dangerous. They knew she was gone because Caleb had been in her dreams. She can only tell her best friend and roommate Sierra because she knows she was missing. Not to tell her boyfriend Terrence.

Caleb tells Julia that he saw part of a prophecy that showed Caleb marrying Julia. Julia does not want to believe him. She loves Terrence.

Their is so much happening in this story. It goes from one problem to another and doesn't answer a lot of the questions I have. So hopefully the next book will and it will be out soon. I plan to read more of Heather's work in the future. I think we need to know more about Sierra's family and past.
I am sure you will want to read this book fast and won't want to put it down till your finished reading it.

Julia already knows she is different. After all, she is a werecat, a shapeshifter. But she has other secrets—deeper secrets about her heritage that threaten to overtake her identity altogether. Spirited away to Sirenity, Julia learns that she is a siren—cursed to be alone forever. Her plans for a future with Terrence now seem futile, and what’s worse, her friend Caleb seems convinced that they are destined to be together despite her curse (and despite Terrence).
But beyond her complicated love life, Julia is still a princess, and she must keep her siren identity a secret. Soon, however, Julia fears that she might lose herself to this new heritage when she is needed most. She can’t afford to have an identity crisis when Alexis, her scheming mother, is plotting against the kingdom!
Filled with secret plots, dual identities, and hidden agendas, this adventure will leave you breathless. Fall into Julia’s world and discover what happens when secrets stay buried for far too long.
Posted by rhonda1111 at 9:06 PM