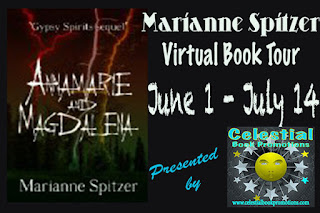 Marianne is on a blog tour for her new book The Annamarie and Magdalena tour. She agreed to write a guest blog for me so I asked Marianne Spitzer these questions. How do you find names for your characters? What is your favorite character name that you have used in your new book? Do you picture a real person to describe your characters looks? For A guest blog and this is what she shared with us.

Characters In My Book

Annamarie and Magdalena is the sequel to Gypsy Spirits and most of the names are the same in both books. Gypsy Spirits was my first novel and I used some of the knowledge I learned years ago, write about what you know. I thought it would be easier to write the book with familiar names.

My grandson Ben wanted to be part of the book and I used his name. He also wanted to be the murder victim. Teen boys have strange ideas. I also wanted my book to sound realistic. The Gypsy family in the book owned a carnival in Bavaria. My paternal ancestors also owned a traveling carnival before 1930. I chose the names Magdalena, Josef, and Georg for Annamarie’s ancestors. They were also the names of my great-grandparents. I did some research on names, but I preferred the names I had. A few of the remaining names in the book were dreamed up, but others were names of people I know.

My favorite name I used for a character in the book is Magdalena. For me, the name is mysterious and romantic. My mom was able to tell me what she remembered about her grandmother. I was able to add some of the physical and personal characteristics into her character.

I did use parts of the personalities of two people I have known in my life for two characters in my book. They weren’t full personality profiles, but just a few funny quirks. They added depth to the character and brought back some fun memories. For other characters, I thought about their hair or eye color, how they dressed, or how they interacted with others. For many character interactions I remembered incidents I have witnessed between complete strangers while I was having coffee or dinner. People watching can be very useful when working on realistic interactions.

Each book is different. My third novel is complete fiction. Names, places, incidents, and interactions were all part of my imagination. I’m sure things I have seen throughout my life plays into my imagination, but nothing I can directly put my finger on. For my next book, I am not sure how I will come up with all the characters. Some may be strictly imaginary and some may be based on a memory of someone I met. That’s one of the best things about writing, the use of all our knowledge and imagination to form a believable story. Happy writing!

Synopsis: “Annamarie and Magdalena” is a supernatural thriller that begins where “Gypsy Spirits” ended. Annamarie walks home from the ordeal in the pines. Certain no one will ever know of her involvement, she tries to settle into the home she inherited from Daniel’s grandfather just two weeks earlier.
Daniel, refusing to accept his own death, has other ideas, and he joins his spirit with the spirit of his best friend, Garret, and an evil man Daniel had planned on killing. What Daniel doesn’t count on is that Annamarie is protected by her great-grandmother Magdalena’s spirit, and her Gypsy spirit family. Annamarie’s unexpected pregnancy drive Daniel to plot to steal his child while Magdalena does all she can to protect mother and child.
Daniel’s evil follows and torments Annamarie in every aspect of her life. Magdalena with the aid of Josef, Annamarie’s great-grandfather, begins a vicious battle of the spirits. Will good win over evil? Will Daniel’s evil be contained? Who will survive? Will Annamarie’s baby be safe or a victim of her father’s evil plan? 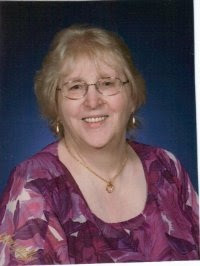 I was born in Milwaukee, and lived there until I was eighteen. Then I spent eight years in Washington state and California before returning to Wisconsin. I love eerie places and books. I began with a love of Nancy Drew books and as I grew I found H.P Lovecraft, Agatha Christie, and Sir Arthur Conan Doyle among others. When I am not writing, I am reading or watching sunsets. I have been writing short stories since I was in grade school. Most were in the form of essays relating real life events. Many were purely imaginary trips to magical places and times. I enjoy making up stories about people I meet or see on the street. I can see a story in a picture, especially if the picture is eerie. My imagination runs wild and free. I have self-published a book of essays and a book of children's stories for my granddaughter, Brittney. Gypsy Spirits is my debut novel and the first in the series of three "spirit" books. I have self-published the second "spirit" book, Annamarie and Magdalena. I also self-published a supernatural mystery, THE LETTER. I plan to have the sequel to THE LETTER out this year and the third "spirit" book available winter 2013/14. From there I am sure my muse will guide me into another story plot.
Posted by rhonda1111 at 5:40 AM