Swept Up by the Sea by Tracy & Laura Hickman 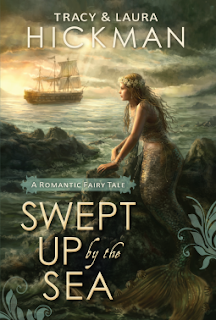 I did not realize that there is a series of books this fits into. I kept expecting more from the story. Then I figured out the main characters were supposed to be silly, dramatic and not very smart. So I just decided to see where it was going and enjoy the ride.
So a few characters lived in their own fantasies and carried everyone with them. It is full of pirates, magic, mermaid, and silly people. It is a clean read recommend for young audience. Nothing is believable.

Percival gets told by a fortune teller that he needs to go on adventure. Go to sea and make his fortune. So he leaves his village and goes to a port town. He is full of pride, well dressed and tries to go to sea, but no one wants him.
Tuppence Magrathia-Paddock is the Govenor's spoiled daughter who is always reading books she should not read. While her father is gone goes down to the docks and runs into Percival and thinks he just like the main hero in the book so she renames him and thinks he is a pirate captain.
The Dragon bard was to arrange a wedding with Percival and Vestia Walters and all parties agreed except Percival was not around for it. So he needed to get them in same town.
Vestia could not believe he left the village instead of marrying her so she follows him. She does not want to look less that she was not worthy of Percival.
Percival has a lot of people wanting to use him for different reasons. He wants to be a pirate captain for Tuppence so he makes a list of what he needs. At least he is trying to get everything on his list.
Lots of characters, lots of action, drama and people realizing what love is and who is worthy of their love. Is treasure gold and jewels? or is it people caring about you and being unselfish.

Determined to seek his fortune, Percival Taylor leaves behind his sleepy hometown and sets out to become a legendary pirate. The only problem is, no one at the rough-and-tumble seaport of Blackshore will allow him anywhere near a ship!

Percival must find other means to win the heart of the beautiful Tuppence Magrathia-Paddock, who has mistaken him for a pirate rogue out of one of her romantic books. She is entirely willing to swoon into his arms if he can prove his buccaneer soul—and she will even arrange her own kidnapping to prove it.

Percival eventually find himself captain of a broken-down ship, complete with a crew of reluctant pirates, a jilted fiancee, a reclusive master shipwright, and an old professor with a magical secret that could kill them all. Join the strangest assortment of characters you'll ever meet on the Nine Seas as they set sail for treasure and romance!