I reread Jack Templar: Monster Hunter last night then started Jack Templar and the Monster Hunter Academy today. I really like both books. They are filled with adventure, heroes who are regular kids that overcome their fears to help their friends. That just because some say this person is bad and all should be killed is not always the best policy. The book has lots of different monsters that are trying to kill Jack and friends. Lots of battles are fought. Lots of action , drama and being friends. It is a clean read. it can be a stand alone book but I would read 1 before 2.

Jack, T-rex, Will and Eva are on their way to the Monster Hunter Academy to be trained to fight monster hunters. Eva keeps telling them that it is really dangerous to go there. Eva is a trainer at the last Academy. She starts training Jack as they travel on a boat heading toward the Alps.

Jack Templar wants answers. Is his father still alive and being held prisoner? What are the Jerusalem Stones? What did his mom do that she wants Jack to forgive her for.? Did he kill Ren Lucre or just wounded him. Why do people think that he is special? His Aunt raised him after his parents died. But she was really a demon wolf and raised him so he could be turned over to Ren Lucre when he turned 14. But she fell in love with him and gave her life to protect him.

Will is Jack's friend. He is short but feisty. His parents beat him and wont miss him. To fight monsters is his chance to belong and make a difference. Jack's Aunt was more of a mother figure for him too.

T-rex is a scared friend of Jack & Will. His grandmother raised him and now they were going to put her in a home and he will go in foster system. He does not want to be a fighter, but would not mind working in the kitchen to help.

Daniel is one of the trainers. He likes Eva but takes a dislike right off the bat to Jack. He is willing to have Will be in his group. He hates the wolves and wants to destroy them especially the big one with white marking on his chest.

This is a engaging series of books I will plan to read the next one when it comes out too. 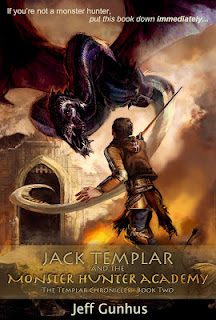 After barely surviving the onslaught of monsters that tried to kill him the day before his fourteenth birthday, Jack Templar leaves his hometown on a quest to rescue his father and discover the truth about his past. Joined by his friends Will and T-Rex, and led by Eva, the mysterious one-handed monster hunter, Jack sets out for the Monster Hunter Academy where he hopes to find answers to his questions. Little does he suspect that the Academy is filled with dangers of its own, many of them more terrifying than anything he’s faced so far. 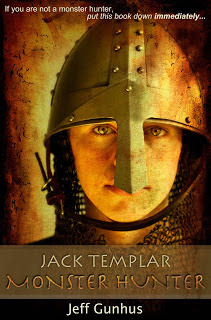 Orphan Jack Templar has no memory of his parents and only the smallest details from his Aunt Sophie about how they died. The day before Jack’s fourteenth birthday, things start to change for him. At first it’s great: A sudden new strength helps him defend his nose-picking friend “T-Rex” from the school bully, and even his crush, Cindy Adams, takes notice. But then a mysterious girl named Eva arrives and tells him two facts that will change his life forever. First, that he’s the descendent of a long line of monster hunters and he’s destined to be in the family business. Second, that there’s a truce between man and monster that children are off-limits…until their fourteenth birthday! Jack has only one day before hundreds of monsters will descend on his little town of Sunnyvale and try to kill him.

As if that weren’t enough, things get even more complicated when Jack discovers that the Lord of the Creach (as the monsters are collectively known) holds a personal grudge against him and will do anything to see that Jack has a slow and painful death. To stay alive and save his friends, Jack will have to battle werewolves, vampires, harpies, trolls, zombies and more. But perhaps the most dangerous thing he must face is the truth about his past. Why do the other hunters call him the last Templar? Why do they whisper that he may be the “One?” Why do the monsters want him dead so badly? Even as these questions plague him, he quickly discovers survival is his new full-time job and that in the world of monster hunters, nothing is really what it seems.

MY REVIEW OF JACK TEMPLAR: MONSTER HUNTER can be found at http://readalot-rhonda1111.blogspot.com/2013/01/jack-templar-monster-hunter-by-jeff.html 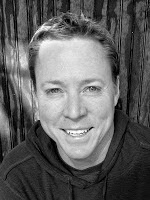 Jeff Gunhus grew up in Cyprus, Greece, and Saudi Arabia where there was a distinct lack of television. He quickly found books were the gateway to incredible adventures, fascinating characters and unbelievable discoveries. Now, with five children of his own (all who watch too much television, in his opinion), he has enjoyed revisiting his old books and reliving those adventures all over again.

Yeah, you read it right. I’m a monster hunter. Back before I actually became one, I would have thought that sounded totally awesome. And don’t get me wrong, in a lot of ways it is. But most of the time, I’m either running for my life or hiding in the shadows, praying the monster chasing me doesn’t pick up my scent. And I’m almost always scared to death. In a few pages, I think you’ll see why.
But there are a few things I need to warn you about before I tell you my story.
First, this isn’t a cartoon. These are bloodthirsty creatures who will stop at nothing to kill. They are scary. Very scary. Second, the only way to stop them is to kill them first…and that gets gross and messy. Third, this is all real.
You think I’m kidding, don’t you? I can almost see you smirking as you read this. But this isn’t a joke. Monsters are real and the story I’m about to tell you really happened. If you’d rather walk through life believing that monsters are only found in books or on the movie screen, then you should shut this book right now and go do something else.
I give you these warnings because the story I’m about to tell you isn’t for everyone. Not everyone can handle it. The blood. The gore. The monsters.
This life was thrust onto me. I had no choice but to take up a sword and fight. But you can still walk away and pretend this dark world doesn’t exist. Or you can walk through the door that I’m about to open and find out the truth about the world around you.
But I warn you (and this is a big warning), if you read this book, if you learn about the monsters that roam among us and the hunters who fight them, if you decide to learn the truth, then you will become fair game for the monsters to chase.
Make sure you understand what I’m saying.
If you read this book, you will be part of this world and the monsters will come after you too. You will start to see things that no other humans can see. The shadows will move when you walk near them. The creatures of the night will seek you out, testing the doors and windows of your house, looking for a way in.
And, at some point, they will find you, just like they found me, and you will be forced to defend yourself.
So, think carefully before you turn the page, because once you do, there’s no turning back.
Ever.
Once a monster hunter, always a monster hunter.
See you on the other side.
If you’re brave enough.
a Rafflecopter giveaway

Hi - Thanks for having Jack Templar on your site and for the review. I appreciate your help getting the word out!