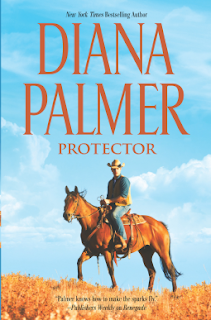 It has been awhile since I have read a story about Jacobsville, Texas. A lot of tough guys live and work there. The description of the book is misleading for me. Or maybe it went over my head and I missed that part. It has happened to me before. There are a few love scenes towards the end of the book. Lots of drama and some action. Some interesting characters. Some good, some bad and some really bad guys. And one big iguana.

Sheriff is home on his ranch when he is shot. He never saw the shooter, but he had his phone and was able to call 911. When he woke up the doctor told him it would be awhile for him to heal from this bullet injury. He could not stay home alone and they could not get anyone to stay with him because of Andy. His six foot iguana that hated females. Hayes has no relatives, his housekeeper is out of town nursing his sick sister. He has one choice and he is not going to like it.

Minette Raynor is raising her little brother and sister. She also lives with her Aunt. Minette runs a newspaper and Hayes hates her. Hayes blames her for his brother dying of drugs during high school. She has never touched drugs or partied. She never gave drugs to his brother.
She offered to let Hayes stay with her family and recuperate on her ranch.

Hayes knows a secret about Minette that he promised his father that he would not tell anyone about it. It was not anything that Minette did but it is why he blames her for his younger brothers death. Now that secret would be coming out and would be dangerous for Minette and her family it could also save her family.

Minette and her Aunt are good cooks and Hayes loves to eat there cooking and it softens his attitude towards Minette. He also realizes that it was not her fault for his brother's death, She is a good mother to her younger sister and brother. Who are cute and like to be with Hayes.

There is a new drug lord from Mexico that is moving into Jacobsville. He is not wanted in the U.S. any of his illegal businesses are done in Mexico. He has lots of enemies and brings danger with him.

If you are a fan of Diana Palmer's you will enjoy reading Protector. I look forward to seeing what happens next in Jacobsville it is getting interesting there.

New York Times bestselling author Diana Palmer takes readers back to Jacobsville, Texas, where Hayes Carson is a lawman on a search for justice.


His brother had been the only family he had left in the world. Hayes, a long, tall and serious Texan, has long been suspicious of the blonde-haired, bright-eyed Minette Raynor, who is both mysterious and beautiful. And now he's convinced that Minette was involved in giving his brother the drugs that killed him. As far as Hayes is concerned, neither her looks nor anything else will stand in the way of him righting what is so very wrong.

Minette can't get Hayes off her mind, or off her back. His investigation of her is a nuisance, but as an undercover DEA agent, that's the least of her worries. Until she finds herself in great danger, and he's the only one who can save her. Can she count on Hayes believing the truth-and saving her life?