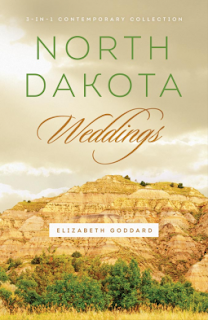 My Review North Dakota Weddings
4 stars
North Dakota Weddings is a collection of three Christian romance novels that have been written by Elizabeth Goddard and put together. They do talk about God, prayer and some scripture as part of the story. Not over done. They are clean reads.

Disarming Andi
Vance Young is supposed to go on vacation but he forgot to take his new telescope and it is late at night goes into work to get it. The security guard goes up to get him and finds a disk and hands it to him. Before he goes on main vacation he drives to where his uncle had left him a house in farm land.
Vance is surprised when he gets to address it is a old missile control center underground. He takes all the stairs down to see what it is like.
Andi Nielsen has started her own business to do construction and her big brake had been to make the decommissioned control center into a high end home. Then he died.
Andi had come back to home to raise her sister Elisa after her other relatives had died. she found a letter saying that her grandfather had hidden something in the missile control center when he was stationed there as a young airman. She hopes it is something that can help her.
Andie sees a car and goes down and meets Vance and talks him into completing the work that will help her make ends meet.
Elisa and Andi are having issues about what Elisa needs to do. and not to do.
I liked the story but would rather have a longer ending. But it was a good story. I would be interesting to see what a home would be that far underground. Never really thought of what happened to all the old missile control bases.
I liked The scene a lot where Vance shares his knowledge of the stars with Andi and Elisa one night.
I would have liked a little more of the storyline of what was going on with the disk that the security guard gave to Vance and what he found out about it.

Exposing Amber
Amber is not sure what exactly she wants to go in for college. Her advisor told her to get a internship and helped her to get one at small museum to see if she wanted to go in that field. She was excited to start her summer internship until she was told she would be working in the gift shop. Not working the fossil digs or tours or working with the exhibts.
Amber had lost her mom and sister a year ago. Her only relative was her brother who she blames their death on him. He has cost her a lot.
Brandon has been running the museum for the last three years. He does not want any interns because of what happened in his past with one. He needs to help get the museum accredited and more donors.
Amber runs the first day and runs into Brandon. She has no idea who he is but ends up telling him that it was part of a bad day. Tells him that she thought to be starting internship instead gets to work in the gift shop.
Brandon decided to make a difference with Amber and puts her on the tours. Brandon is attracted to Amber a lot but he does not want to get involved.
Amber is mad at God and does not feel she can pray but she does not give up reading the bible. She just feels he let her down.
Brandon is a Christian and a scientist and its hard for a lot of people to be in science and a Christian. Does talk a lot about forgiving. Fits right into the story.

Praying for Rayne
This story was my least favorite. Had a hard time connecting with all the characters. Trying to figure out why and can't narrow it down.
Rayne Flemming is a creative force and works on developing water fountains she is expecting a new promotion at work that she hopes will make her parents proud of her. They wanted her to stay on the farm.
When Rayne gets back to work she finds out that her boss went and hired someone else for the job.
Jack Kostner has just moved to North Dakota to head up the creative team. He was hurt by his fiancé and was dumped a few days before the wedding. They worked together and that made it hard.
This story had something lacking for me.
Over all I enjoyed reading North Dakota Weddings. I look forward to reading more of Elizabeth's work in the future.
I was given this ebook to read and asked to give honest review of it by Netgalley and Barbour books.
07/01/2013 PUB Barbour Publishing, Inc. 368 pages ISBN 9781624162558


True life threatens true love in three contemporary romances from North Dakota. Andi is remodeling a decommissioned missile site and searching for a treasure hidden within. Can she detonate her feelings for the owner when romance gets in the way? Amber is excited to be a new summer intern for the Harrington museum and Dr. Brandon Selman. It’s the opportunity she needs to determine her future, but will past secrets be her undoing? Rayne’s job designing magnificent fountains for FountainTech is a dream come true until charges of corporate espionage swirl. Is it the end of her dream. . .and love?