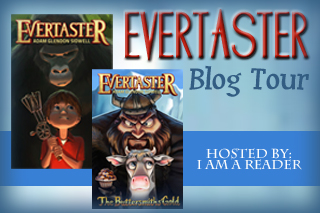 TORBJORN AND STORFJELL’S HISTORY UNFOLDS IN AN EPIC EVERTASTER NOVELLA.


Everyone knows the most coveted treasure of the Viking Age was blueberry muffins. Blueberry muffins so succulent that if you sniffed just a whiff, you’d want a whole bite. If you bit a bite, you’d want a batch; if you snatched a batch, you’d stop at nothing short of going to war just to claim them all.

Young Torbjorn Trofastsonn comes from the clan that makes them. He’s a Viking through and

through – he’s thirteen winters old, larger than most respectable rocks, and most of all, a Buttersmith. That’s what he thinks anyway, until a charismatic merchant makes Torbjorn question his place among the muffin-makers. When Torbjorn lets the secret of his clan’s muffin recipe slip, he calls doom and destruction down upon his peaceful village and forces his brother Storfjell and his clansmen to do the one thing they are ill-prepared to do: battle for their lives.

The Buttersmiths’ Gold is a spin off novella in the Evertaster series that tells the story of two Viking brothers and their adventurous past. The Evertaster series (Book #1 released June 14, 2012) is about Guster Johnsonville, who goes searching for a legendary taste rumored to be the most delicious in all of history. Along the way he meets a slew of mysterious characters, including two Viking brothers Torbjorn and Storfjell. The Buttersmiths’ Gold is their story. 124 pages. By Adam Glendon Sidwell. Published by Future House Publishing. 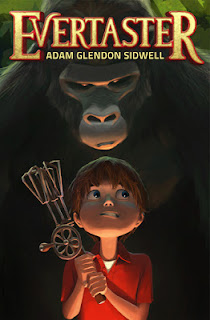 A legendary taste. Sought after for centuries. Shrouded in secrecy.

When eleven-year-old Guster Johnsonville rejects his mother’s casserole for the umpteenth time, she takes him into the city of New Orleans to find him something to eat. There, in a dark, abandoned corner of the city they meet a dying pastry maker. In his last breath he entrusts them with a secret: an ancient recipe that makes the most delicious taste the world will ever know — a taste that will change the fate of humanity forever.


Forced to flee by a cult of murderous chefs, the Johnsonvilles embark on a perilous journey to ancient ruins, faraway jungles and forgotten caves. Along the way they discover the truth: Guster is an Evertaster — a kid so picky that nothing but the legendary taste itself will save him from starvation. With the sinister chefs hot on Guster’s heels and the chefs’ reign of terror spreading, Guster and his family must find the legendary taste before it’s too late. 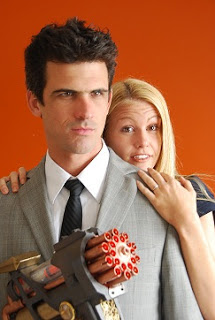 In between books, Adam Glendon Sidwell uses the power of computers to make monsters, robots and zombies come to life for blockbuster movies such as Pirates of the Caribbean, King Kong, Transformers and Tron. After spending countless hours in front of a keyboard meticulously adjusting tentacles, calibrating hydraulics, and brushing monkey fur, he is delighted at the prospect of modifying his creations with the flick of a few deftly placed adjectives. He’s been eating food since age 7, so feels very qualified to write this book. He once showed a famous movie star where the bathroom was. Adam currently lives in Los Angeles, where he can’t wait to fall into the sea.

My Review of Evertaster Book 1
4 stars

You thought you had picky eaters! This book makes you hungry. Talks a lot about picky eaters who only want the most pure food. It is over the top funny. Probably aimed at middle school age but is fun the whole family can enjoy. This is a battle around the one perfect recipe with the finest ingredients gathered from all over. One side wants to control it. They also want to destroy factories that make food for the masses. The recipe is supposed to bring world peace but it has never been made. It is now in the hands of a eleven year old Guster who is always hungry but won't eat food because it is not perfect. He is in the middle of the battle, he has to choose which side he is on.

Their is the bad chefs in the red hats. Their are giant chickens, giant Vikings, giant gorillas. The perfect ingredients are eggs growing from trees, a sugar mine underground. Many more mixed up food. They are chased in a car, their are explosions, secret passages, family fighting and pulling together. It is a fun book, a silly book, a action and adventure book and a cookbook all in one. It makes you want to eat fresh blueberry muffins, best tasting bananas and more food.

The characters are a regular family, evil chefs, private army and many more. Most over the top they will make you laugh or smile. You are pulling for Guster to choose right. His sister Mariah is smart she helps her brother. Zeke brother who teases. Henry Jr. the baby of the family he rides in backpacks of different members of his family. The mom who is trying to help her picky eater than keep the rest of the family safe as they go on the treasure hunt.

Can't wait to read the next book. 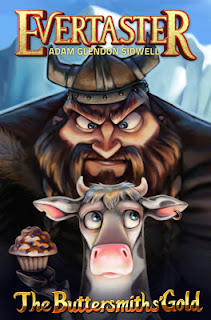 My review is below.
4 stars

Evertaster & the Buttersmith's Gold tells the story about the Vikings and how they came to have so rich butter from their cows. We met Torbjorn and Storfjell in book 1. This story is all about their Viking ancestors.

It is a lot shorter story, but a fun adventure one. A different Torbjorn and Storfjell are the main characters. They live in a village that was isolated from others. They would trade their butter and blueberry muffins to others then leave to go back home to wear they lived.

They said Torbjorn was old enough to handle the bargaining at a young age. He made a lot of mistakes as was normal for first timers. But one mistake he told his village greatest seceret.

The Buttersmith's gold is not over the top silly like the first book. You can almost believe that it really happened that way. It grabs your attention and holds onto it. It has a battle or two. Also Trolls chasing them. It shows how the different choices they made effected their whole tribe.

The characters Torbjorn and Storfjell are just teenage brothers who are around 8 feet tall. Storfjell is the older brother. He makes a choice that his tribe does not like but saved them.
Torbjorn made a mistake and then kept it a secret and made the problem worse before he told his tribe. They are likeable characters.

I can't wait for the next Evertaster that brings Guster and his family their next adventure.
I was given these two ebooks and asked in return to give honest review as part of their blog tour.