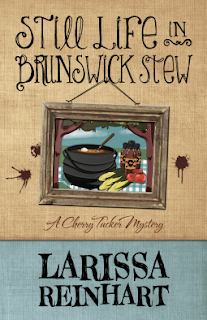 This is the second book in Cherry Tucker Mystery. I like this cozy mystery. It is over the top fun. Cherry gets into so much trouble poking her nose into police cases. Never new who the killer was till the end. Lots of fun, tension, soap opera characters surround Cherry.

Cherry paints pictures in a small town. She is not making money but keeps trying. She has a sister and brother who live on their Grandpa's farm with him. Her boyfriend Luke is now a deputy who works for her Uncle Will as Sheriff. Her ex-husband is still in her life. She has a enemy who is always around her boyfriend's house. Picks fights with her.

Cherry and her friend Eloise are at a Bunswick stew fair selling their art. When her friend gets sick in her arms. Later she dies. Lots of people were sick from food poisoning at the fair. They just think Eloise other health problems caused her to die. Eloise family gets her body tested. No one is really looking into her death.

Eloise family asks her to help. Cherry feels bad that she has not been a better friend lately so starts asking around in the town the fair was in. Cherry keeps getting into trouble.
Luke tells her to stay out it. It is a police business. Her Uncle Will tells her that she is close to being jailed for getting in the way.

Todd her sort of ex-boyfriend kissed her late one night. Cherry feels bad about that and guilty. She is also worried that he is gambling again. She tries to figure out what Max is doing hosting bingo games for old ladies at his big house.
Cherry sure ruins a lot of dresses in this story with all the trouble she gets into.
The worst part of the book is it ended. I want to know what is going to happen next in her life.

This is a fun light hearted murder mystery. Not the murder it is all the stuff that happens around Cherry as she tries to figure out who killed her friend and why.

I hope the next book in Cherry Tucker Mystery comes out quickly before I forget where this book ended.
I was given this ebook to read and asked in exchange to give honest review of it by Netgalley.
Published May 21st 2013 by Henery Press 288 pages ISBN:1938383400

Cherry Tucker’s in a stew. Art commissions dried up after her nemesis became president of the County Arts Council. Desperate and broke, Cherry and her friend, Eloise, spend a sultry summer weekend hawking their art at the Sidewinder Annual Brunswick Stew Cook-Off. When a bad case of food poisoning breaks out and Eloise dies, the police brush off her death as accidental. However, Cherry suspects someone spiked the stew and killed her friend. As Cherry calls on cook-off competitors, bitter rivals, and crooked judges, the police get steamed while the killer prepares to cook Cherry’s goose.
Posted by rhonda1111 at 5:09 PM