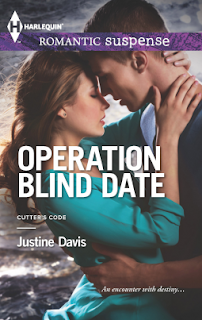 Operation Blind Date is good read. It is the first of the Cutter's Code series that I have read. I wish I had read the first two they sound good what little I know about them. Cutter is a dog who showed up and gets people to do what he wants. The people of the Foxworth Foundation trust him. They put a lot of faith in that dog.

Cutter was done at the groomers and Teague was asked to pick him up. When he did he realized the groomer had been crying. Teague hates dealing with woman's tears. But Cutter won't let him go till he finds out what's wrong.

Laney after a few minutes tells him about her friend Amber that she lined up for a blind date is missing. No one the police or even her friend's family think anything is wrong.

Amber has sent text messages from her phone and even email saying she is going away with a guy. Laney knows their is something not write about the texts. When she texts back asking questions they are never answered either. Amber always texts and called her everyday. She has not done anything for Amber to behave differently with her.

Teague tells her that his company can help. That they don't charge anything but if they take the case they don't quit until it is solved or the client tells them to quit. Teague has never taken a client to his boss before. His boss has rules about what cases and when to show where their office is.

Quinn listens to Laney and Teague tell her problem, then when Teague tells Quinn that Cutter really decided that Laney needs their help. Quinn agrees right then to take Laney's case. They will find out if Amber is just with a new boyfriend and in love or if something else is wrong.

The story builds slowly till you are in deep into the story. I like Cutter and would to read the others stories about him. I like that Laney is trying to do everything to find her friend. She notices that the information in the texts are not right. Laney cares about Amber and is willing to do anything to find her. Has lots of drama and some action. Lots of good guys. Couple of Love scenes that I skipped over.

I would also like to read more about the Foxworth Foundation and see all that they do to help others. What a great idea. Reminds me of the old TV series Equalizer kind of.

Description below taken off on Netgalley.

When a loved one goes missing...and no one believes you...
Weeping in front of customers isn't Laney Adams's style. She would have gone unnoticed if Security expert Teague Johnson hadn't come to her grooming shop to pick up his boss's dog, Cutter. Something about Teague-or maybe it's the uncannily perceptive canine-compels her to open up about her best friend who's gone missing and how she feels responsible. The confession reminds Teague of his own secret guilt. He can't turn away. With the help of the Foxworth Foundation-and Cutter­-Laney and Teague launch a dangerous search that leads to unexpected twists...and undeniable passion.